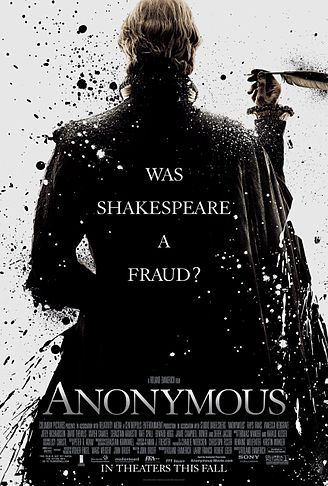 A hat tip to Bub for alerting me to the upcoming (October 28) release of the movie "Anonymous." Those of you who are long-time readers of this blog may remember or have surmised that I am a proponent of the proposition that Edward de Vere was the true author of the works attributed to the "shakspere" guy in Stratford.

The movie is directed by Roland Emmerich (Stargate, Independence Day, The Day After Tomorrow, 2012), who has said this re its development:


It's three characters. It's like Ben Jonson, who was a playwright then. William Shakespeare who was an actor. It's like the 17th Earl of Oxford who is the true author of all these plays. We see how, through these three people, it happens that all of these plays get credited to Shakespeare. I kind of found it as too much like Amadeus to me. It was about jealousy, about genius against end, so I proposed to make this a movie about political things, which is about succession. Succession, the monarchy, was absolute monarchy, and the most important political thing was who would be the next king. Then we incorporated that idea into that story line. It has all the elements of a Shakespeare play. It's about kings, queens, and princes. It's about illegitimate children, it's about incest, it's about all of these elements which Shakespeare plays have. And it's overall a tragedy.

I suspect it will be a little "over the top," but perhaps it will introduce more of the general public to the doubts surrounding the Stratford man's authorship.

More about the Shakespeare authorship question some other time. Those who are interested in literature and history will be well rewarded by scanning this Wikipedia article on the Oxfordian theory, and then visiting the website of the Shakespeare-Oxford Society.