"The soldier lays a honey trap" 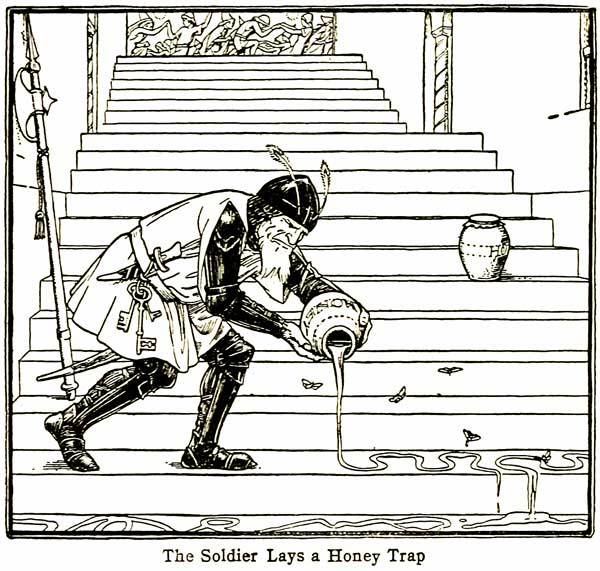 Modern readers of espionage novels (or viewers of such movies) will know the term "honeypot/honeytrap" as referring to a sexual seduction (also relevant to real life).  The term meant something quite different a century ago, as shown by this illustration from a 1916 book entitled "Europa's Fairy Tales."

The image accompanies "The Cinder-Maid" -


...when Cinder-Maid went to the ball the Prince would dance with none but her; and when midnight came round she fled as before. But the Prince, hoping to prevent her running away, had ordered the soldiers at the foot of the stair-case to pour out honey on the stairs so that her shoes would stick in it. But Cinder-Maid leaped from stair to stair and got away just in time, calling out as the soldiers tried to follow her...

They later try to trap her with tar (which also fails).  I also found it interesting that in this version of the Cinderella tale, when the wicked sisters can't get the shoes on their feet, they cut off their toes and heels (!!!) - 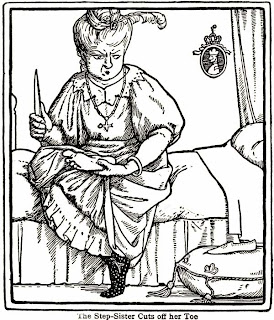 And when the herald came to the house of Cinder-Maid's father the eldest of her two step-sisters tried on the golden shoe. But it was much too small for her, as it was for every other lady that had tried it up to that time; but she went up into her room and with a sharp knife cut off one of her toes and part of her heel, and then fitted her foot into the shoe...

The Prince discovers the deception -


And the Prince looked down and saw the blood streaming from her shoe and then he knew that this was not his true bride, and he rode back to the house of Cinder-Maid's father; and then the second sister tried her chance; but when she found that her foot wouldn't fit the shoe she did the same as her sister...

This is a nice reminder that modern versions of fairy tales have been extensively modified (read "cleaned up"/Bowdlerized) from their original content.

If you like fairy tales, this is an excellent book.  Be sure to take read the informative end notes as well.