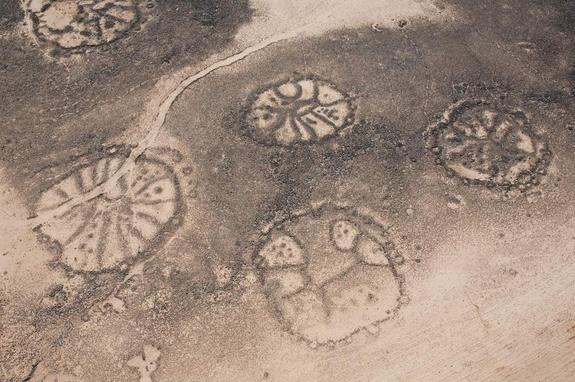 Referred to by archaeologists as "wheels," these stone structures have a wide variety of designs, with a common one being a circle with spokes radiating inside. Researchers believe that they date back to antiquity, at least 2,000 years ago. They are often found on lava fields and range from 82 feet to 230 feet (25 meters to 70 meters) across...

Kennedy's new research, which will be published in a forthcoming issue of the Journal of Archaeological Science, reveals that these wheels form part of a variety of stone landscapes. These include kites (stone structures used for funnelling and killing animals); pendants (lines of stone cairns that run from burials); and walls, mysterious structures that meander across the landscape for up to several hundred feet and have no apparent practical use...

In Saudi Arabia, Kennedy's team has found wheel styles that are quite different: Some are rectangular and are not wheels at all; others are circular but contain two spokes forming a bar often aligned in the same direction that the sun rises and sets in the Middle East. The ones in Jordan and Syria, on the other hand, have numerous spokes and do not seem to be aligned with any astronomical phenomena. "On looking at large numbers of these, over a number of years, I wasn't struck by any pattern in the way in which the spokes were laid out," Kennedy said.

Very interesting (they look a little bit like mitochondria !).  I've previously blogged about the kite-shaped structures in Syria.  There's further discussion of these "wheels" at the Live Science source, which also has an excellent gallery of photos.  Those really interested in the subject matter should visit the APAAME's Flickr Photostream, which has over 2,000 pages of photos.