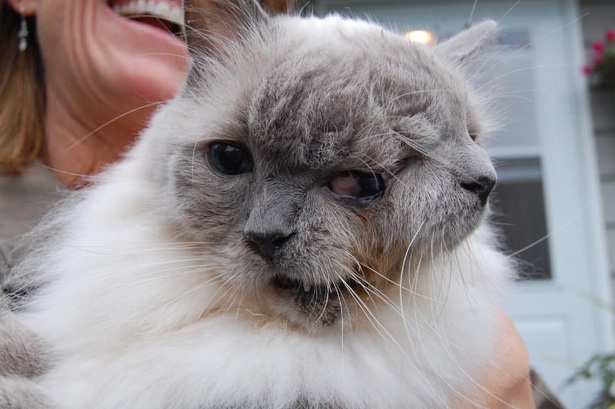 Frank and Louie... has two mouths, two noses and three eyes. He turned 12 years old this month, setting the record for "longest surviving Janus cat," according to Guinness World Records. Frank and Louie has a case of craniofacial duplication, an extremely rare congenital condition... Frank and Louie was born on September 8, 1999 and was adopted by a woman who lives near Worcester, Massachusetts. Picture: REUTERS/David Niles

This was one of the Telegraph "pictures of the day."  The last time I posted a report about this anomaly was almost three years ago; this time I decided to read more about the biology involved.  These excerpts from the Wikipedia entry on diprosopus (literally "two" + "face"):


Although classically considered conjoined twinning (which it resembles), this anomaly is not normally due to the fusion or incomplete separation of two embryos. It is the result of a protein called sonic hedgehog homolog (SHH)...