"Everybody out for a pass" 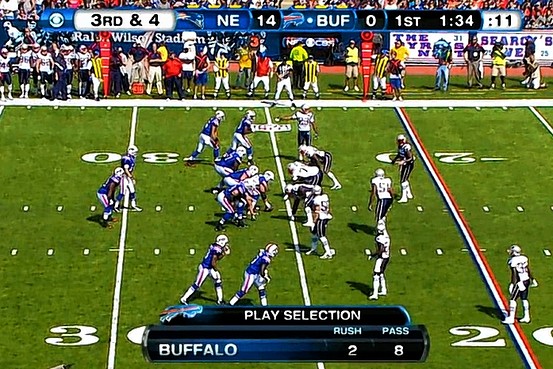 
Buffalo may have won the early prize for the innovation of the year—one that is playing a leading role in the team's surprising early-season breakout. You can call it the "stack," the "bunch," or maybe even the "spread scrunch..."

For nearly the entire game Sunday, the Bills had four wide receivers on the field, and often used five. (A traditional NFL alignment consists of two wide receivers.) They also sometimes lined up their tight ends as wide receivers and flung their running backs off to the corners.


At first glance, these formations look much like the spread offense that's popular in college football. But in practical terms, they're not necessarily all that alike...

Essentially, the players are setting a pick, the way a basketball player might. Picks are normally against the rules in the NFL, but there is one loophole: When a pick happens because of the simple design of the passing routes, it's not illegal.

When I was a kid playing touch football in the yard after school, the standard "play" was "everyone out for a pass." More re the NFL version at the link.