The future of ketchup packets (on the left) 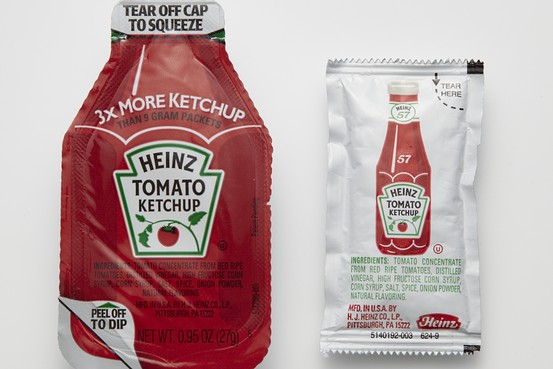 Some people rip off the corner of the packet with their teeth. Others, while driving, squirt the ketchup directly into their mouth, then add fries. Some forgo fries at the drive-through all together to keep from creating a mess in the car.

As the name promises, "Dip and Squeeze" ketchup can be squeezed out through one end or the lid can be peeled back for dipping. The red, bottle-shaped packets hold three times the ketchup as traditional packets. The new containers are more expensive than the old sleeves, but Heinz hopes customers learn not to grab more than one or two.

Heinz believes traditional ketchup packets are so annoying that they stop people from ordering fries at drive-thrus.

More at the Wall Street Journal.  I guess Heinz' staff/management should be commended for their innovation, but personally it bothers me that this is being done to make it easier for people to eat while driving a car.