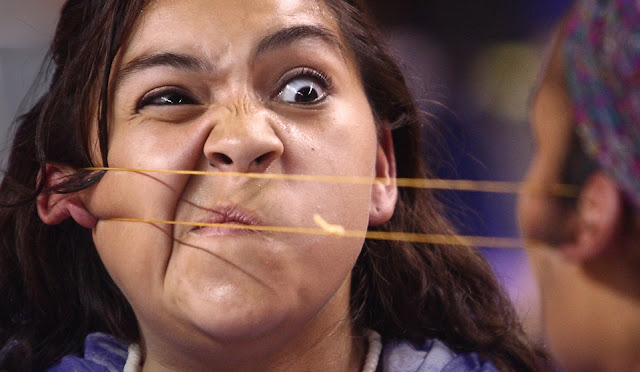 From the "Big Shots" compilation of the 100 Best Sports Photographs of 2010 (Part 3) at Boston.com's The Big Picture.


The ear pull is a traditional Inuit game which tests the competitors' ability to endure pain.  In the ear pull, two competitors sit facing each other, their legs straddled and interlocked. A two-foot-long loop of string, similar to a thick, waxed dental floss, is looped behind their ears, connecting right ear to right ear, or left to left.  The competitors then pull upon the opposing ear using their own ear until the cord comes free or one player quits from the pain.  The game has been omitted from some Arctic sports competitions due to safety concerns and the squeamishness of spectators; the event can cause bleeding and competitors sometimes require stitches.

Here's a video of the women's competition in 2007: