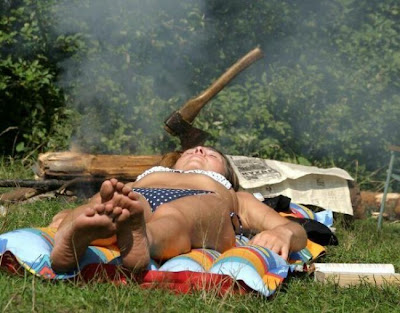 I'd like to think that most bloggers make sincere efforts to give credit for photos and images they use on their blogs, for reasons of common courtesy as well as copyright. Sometimes, however, problems arise which are not easily surmounted.

Photos saved without reference data
Sometimes photos or images have credits embedded within them either as watermarks (typically from professional photographers), labels (as in the National Geographic contests), or political cartoons (for which I consider the cartoonist's signature as constituting appropriate credit rather than the webpage where it was depicted. In those cases, when one saves the photo, the credit remains "attached."

Saving photos is easy; saving the source is much more difficult. The picture above is one I downloaded years ago into a "miscellaneous humor" file. When I do "save as" on Firefox with a Mac, I can type a hundred characters into the file name, so I could (theoretically) type in the entire url of the photo as I save it. Having not done so in the past, or made any written notes re its source, should I not use it? I have on occasion used images with the notation "source unknown," figuring that putting them in a noncommercial blog without source info is a minor sin.

Crediting a photo that is widespread on the 'net
One website that every blogger should have bookmarked for reference is TinEye Reverse Image Search (there may be other similar sites). TinEye has a Google-level simplicity to its homepage; one simply uploads an image (or inserts the url of an image), and the site will search the web for similar images. It is very useful for finding the context of unusual images, completing sets of images, or searching for original attribution.

In preparing to write this post, I inserted the "ax not in head" image above. TinEye then returned to me 54 websites that have used this photo (none of them likely to have been my original source). A seriously anal-retentive blogger (or an FBI agent) would probably click all 54 of those sites and see which of them provide credit for the photo, but most of them won't have done so, and most of the others will have credited one another. When an image (especially funny images or political caricatures) have been on the web long enough, the crediting schema of serial "vias" becomes like an ouroboros.

Photos found at photoblogs or photo storage sites
Are you familiar with Pixdaus? A wonderful - I would say unparalleled - site for viewing photos and finding material for screensavers. 10 photos per page x 6500 pages (you do the math). Photos are uploaded by a community of people, who take credit for the upload, but I have yet to discover a way to discern the source from which the photos were taken.

I have used pictures from Pixdaus in the past, and listed the website as the source, but it feels wrong to give "credit" to a website that doesn't seem to give credit to the original photographer or webhost. I have the same hesitance with regard to Dilidoo, which every day has a large picdump, but all the photos are uncredited, and many or most can't be tracked with TinEye.

A similar dilemna arises for me at Widelec. I always give them credit for photos, because they post photosets, and I typically use one or two and want to send TYWKIWDBI readers to the site to see the rest of the set if it interests them. But Widelec is an photo aggregator site, and I have not been able to find the original credit for the photos (in this case my failure may be a language problem).

To my mind the best photo storage sites are those like Boston.com's award-winning The Big Picture, where photos are aggregated with credit to AP, Reuters etc.