Green gems for the afterlife 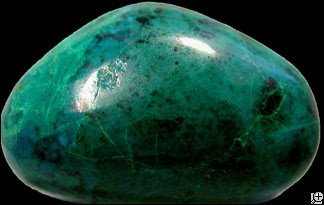 Feb. 5, 2009 -- A rare mummified child from the early period of Egyptian history was discovered buried with a bright green amulet stone once believed to hold magical powers.

She and her colleagues first examined the child's remains, which were wrapped in linen bandages. Immunological evidence determined that the youngster died from an acute malarial infection.

Powerful X-rays, as well as scanning electron microscope analysis, revealed that the stone was chrysocolla, or hydrated copper silica, according to the paper that will be published in the March issue of the Journal of Archaeological Science.

Bianucci said malachite was a more common green mineral in early Egypt, since chrysocolla ores were limited to very few in the Sinai and the Eastern Egyptian Desert. Chrysocolla may have been special for children, as archaeologists previously unearthed a small figure of a child made of the green material in another grave.

In ancient Egypt... green -- the color of new vegetation and growing crops, including the treasured papyrus plant -- was linked to health and "flourishing... red was the color of life and victory, white suggested omnipotence and purity, black was a symbol of death and the night, blue symbolized life and rebirth and yellow was thought to be eternal and indestructible, like the sun and gold.