Helter skelter in an office building 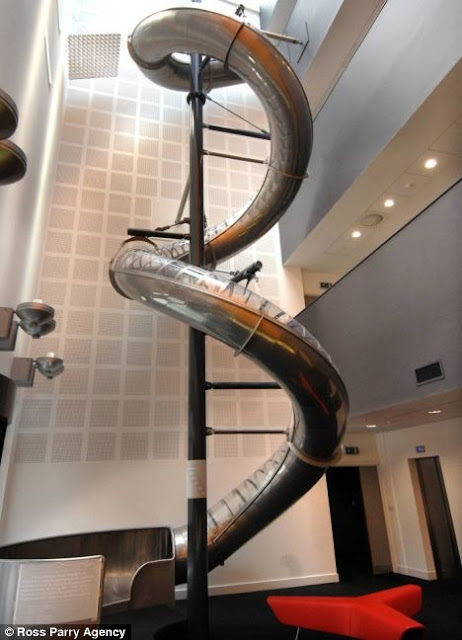 I have seen pictures of indoor slides, including spiral slides, on the 'net (example on the left), and have wondered whether they were real, or concepts, or digital creations. Now the Mail Online is reporting that a British office building has installed a real one - three stories high at that!

It reportedly allows employees to travel from the third floor to the first floor (40 vertical feet) in seven seconds. The designers acknowledge that health and safety inspectors will have reservations about the passageway, but they decided to go ahead with it in order to "make a statement about risk-taking" (and to draw attention to their media-related business, no doubt).

TYWKIWDBI fully approves. For a two-story house I would love to have a fireman's pole available as a supplement to the regular stairs...

The other interesting aspect is the apparently exclusively British usage of "helter skelter" to define this structure. Per Wikipedia "A helter skelter is a funfair or amusement park ride with a slide built in a spiral around a high tower. Users climb up inside the tower and slide down the outside; usually on a mat." The term "helter skelter" was also used by Phil Collins in the Genesis song "Tonight tonight tonight":


Try to pick yourself up, carry that weight that you can't see,
Don't you know it's alright
Its like a helter skelter, going down and down, round and round
But just get it away from me - oh.

I never did understand those lyrics before. You learn something every day. I'm still unclear as to how the words "helter" and "skelter" came to define a spiral slide. That's for another day...