This is a "Tapsel gate" 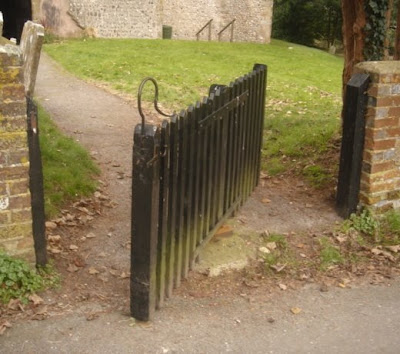 A Tapsel gate is a type of wooden gate, unique to the English county of Sussex, which has a central pivot upon which it can rotate through 90° in either direction before coming to a stop at two fixed points. It was named after a Sussex family of bell-founders, one of whom invented it in the late eighteenth century. Only six examples survive, all in a 10-mile (16 km) radius of Lewes,the county town of Sussex.

Tapsel gates are made of wood and are balanced on a solid wooden or metal pivot, instead of being hinged on one side. They can be opened easily, in either direction, with a small push; they therefore are much easier to negotiate than more typical gates.

Common problems of side-hinged gates—heaviness and susceptibility to breakage, for example—are avoided. Also, a Tapsel gate can be opened in a smaller area than would be needed for a side-mounted gate. Because the gate is mounted in the centre of the opening in a wall, it effectively halves its width, which prevents passage by large animals, but allows people to pass through on either side easily. This characteristic is especially beneficial in churchyards, enabling pallbearers to carry a coffin through a gate without difficulty.

Photo and text from Wikipedia.