Some Brits are scared of a disabled woman 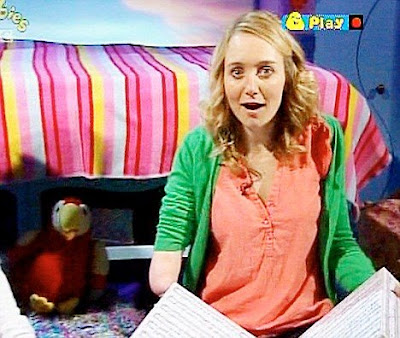 A disabled CBeebies presenter has been the victim of a disturbing campaign after parents complained that she was scaring toddlers.

They claimed that host Cerrie Burnell - who was born with one arm - is not suitable to appear on the digital children's channel...

But the decision to hire her has prompted a flurry of complaints to the BBC and on parenting message boards, with some of the posts on the CBeebies website becoming so vicious that they had to be removed.

Incredibly, one father said he wanted to ban his daughter from watching the channel because he feared it would give her nightmares.

Others claimed that they were forced to discuss difficult issues with their young children before they were ready.

One blogger wrote: 'Is it just me, or does anyone else think the new woman presenter on CBeebies may scare the kids because of her disability?

'I didn't want to let my children watch the filler bits on The Bedtime Hour last night because I know it would have played on my eldest daughter's mind and possibly caused sleep problems. And yes, this is a serious post.'

Some even accused the BBC of hiring Miss Burnell, 29, because of 'political correctness' and solely to meet employment quotas.

One notice board comment read: 'What is scary is the BBC's determination to show " minorities" on CBeebies at every available opportunity!

(More at the Daily Mail online. Via Neatorama's Upcoming Queue.)