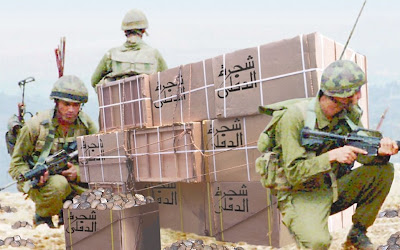 It is believed that the shipment came from a rogue Soviet republic willing to sell rocks to the highest bidder on the international arms market.

The value of the shipment—250 crates filled with rocks, pebbles and gravel—is estimated in the neighborhood of 800 million dinar (about $6)...

Israeli officials vowed to track down the supplier of the weapons. "Whatever secret underground rock smugglers have been outfitting the Palestinians, we will find them," Israeli Defense Minister Avi Birkot said. "Rocks like these could really hurt someone."

According to munitions expert James Wolk, if thrown with enough force and accuracy, the seized rocks "could create permanent scuff marks in an Israeli tank, and possibly even make a small dent."

One blogs the topic of Israel and Gaza with some degree of trepidation, since it's so easy to offend people. So, let me make it transparently clear that the above photo and text come from The Onion (and for those who live under rocks themselves, The Onion is a humor publication).

War is not funny, and I would be among the last ever to make fun of the suffering (by the soldiers and the public) on both sides when countries engage in the typically fruitless endeavor of war. I encountered this today and decided to blog it NOT to make fun of Israel, NOT to make fun of Palestine, but to note the DATE on which this was written: November 5, 1996.