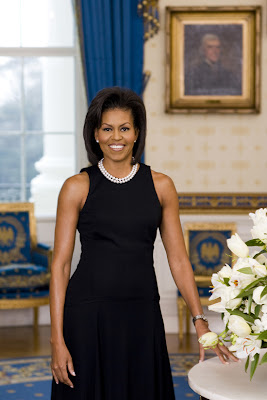 HuffPo (and many other sites) have featured articles this week on the new First Lady's choice of fashion. TYWKIWDBI tries to avoid celebrities and fashion, but we will weigh in on this. The silly and superficial tempest in a teapot revolves around her decision to wear sleeveless dresses for official functions (including the official portrait above):

The First Lady impressed many, but also made a few waves on Tuesday night when she broke with tradition and wore a sleeveless Narciso Rodriguez dress to the President's address before Congress. Opinion was divided over whether it was appropriate to show so much skin at such a ceremonial event.

"'Does the lady not understand that these Big Speech Events are serious and important? Not a cocktail party?'" wrote one Chicago Tribune reader. "''The season is winter. The occasion is business. Dress was wrong place and time.'"

We have scrolled through a few of the 22 pages of comments that accompany that article; we agree with the sentiment that the public is tired of Washington women in pantsuits and jackets, but more importantly we wholeheartedly affirm the observation that the Second Amendment to the Constitution guarantees the right of Americans to bare arms.