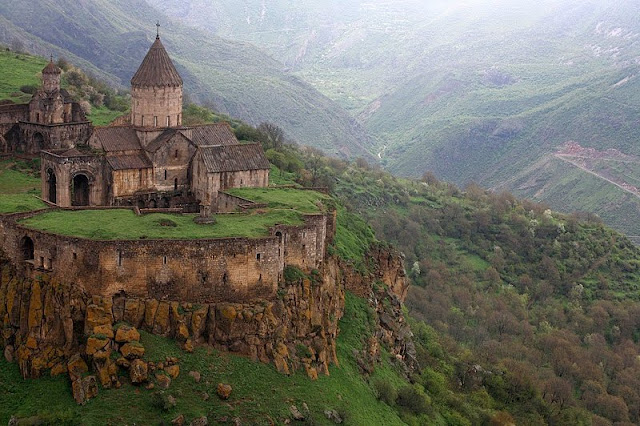 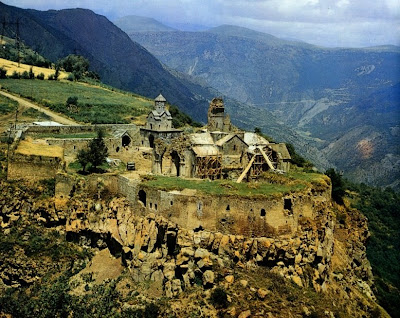 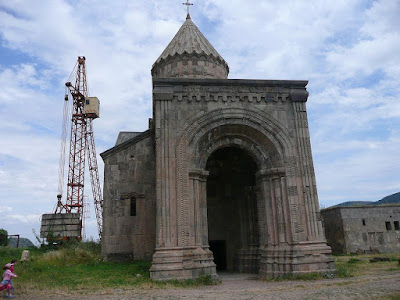 One of the several pleasures of blogging is receiving comments from people whose knowledge is different and more extensive than mine, and those who have the time and ability to find things on the 'net.

In January I blogged the top photo above, of an unidentified building in a remarkably scenic location somewhere in Armenia. I was fascinated first and foremost by the location; the outcrop of rock overlooking a valley looked like a place which would have been strategically favorable since neolithic times. I imagined hunter-gatherer priests putting temples here millennia before this apparent monastery.

Secondly, I was fascinated by the structure (click to enlarge the photo). A cross-shaped building with a cross atop it, but with fortifications, perhaps arrow-windows, and at the left of the photo a large gaping arch that seems to open to a vertical cliff - too patent for defensive purposes. Was it where debris and garbage was tossed to the wolves/peasants? It reminded me somewhat of the larger building in the cinematic version of The Name of the Rose.

Literally within hours of my posting the photo, Rich H identified it as Tatev Monastery and provided some links. Shortly thereafter John McNulty tracked down more information. Armed with those data I was able to piece together a bit of this history of this interesting place, including the monastery's home page. (maps and sat photos here at GeoSat, coordinates already logged in - just click.)

The monastery was founded in the ninth century at the location of much older temples; the first churches per se were chapels in the 4th century. The main Church of Pogos and Petros (Peter and Paul) was built in 895-906. At that time the monastery had a population of 1,000 and controlled numerous villages; by the 13th century it owned 680 villages.

The peasants did not always welcome being “owned” by the monks; on several occasions they rose up (presumably with fire and pitchforks), attacked the monastery, and plundered it.


“In the X century to enlarge its domination the monastery made the neighbored villages disport. At the time the peasants were over totaled and darted off the monastery, especially the Tsuraberdiants (Svarants) in 910, and seized the monastery, killed some monks and the others were thrown down the canyon.”

“...in the first period of XI century Tatev was ruined by Seljuk's for the first time… The Turks plundered the monastery. An unique cultural treasure: 10000 manuscripts created within 300 years were stolen. It is impossible to imagine the value of this manuscripts.”

Grigory Church adjoins the main church; it was built in 1295 in the place of an earlier building of 836-848.


“In XV century the band of bloodsucker Lank-Tamor reached Tatev and set fire to the temples and stole the treasures of the monastery. He plundered the whole library. They destroyed all the holy-chipped stones from the monastery walls and took to Samarghand….”

“It is difficult to say what happened in the next XVI-XVII centuries. There is nothing in the history about this land.”

Some walls “are decorated with representations of human faces, to which snake heads with stings sticking out are turned. Armenians believed snakes to be the protectors of their homes.”

The monument "Gavazan", erected in 904 in the yard, near the dwelling premises of the monastery, is a unique work of Armenian architectural and engineering art. This is a octahedral pillar, built of small stones; eight meters tall, it is crowned with an ornamented cornice, with an open-work khachkar towering on it. As a result of seismic tremors, and even at a mere touch of human hand, the pillar, hinge-coupled to a stylobate, tilts and then returns to the initial position.”

The door of Tatev Church is an outstanding work of woodcarving art (1253 and 1614, the State History Museum of Armenia).

The residential and service premises, arranged in a single row on the perimeter, set off the polyhedral rock foundation and seem to be an extension of it. “Besides dwelling rooms, there was also writing-house, teacher's-room, school, bathroom and a great number of production buildings: workshops, reserves, and etc.”

Stepanos Orbelian, the medieval bishop/historian of Syunik, recounts that Tatev housed 600 monks, philosophers "deep as the sea," able musicians, painters, calligraphers, and all the other accoutrements of a center of culture and learning. The monastery produced teachers and manuscripts for the whole Armenian world. 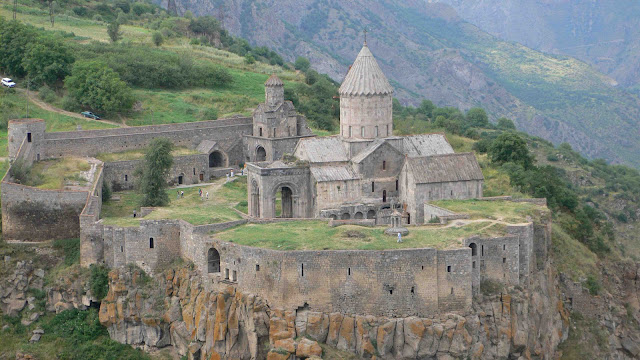 At the top is the original photo from January, then a view of early reconstruction efforts, a view of more recent work inside the complex, the monument, and a millstone in the residential/work complex. The bottom photo is the best; it enlarges to wallpaper size and thereby generously rewards a click.

But I still don't know what that big arch in the wall overlooking the cliff was used for...