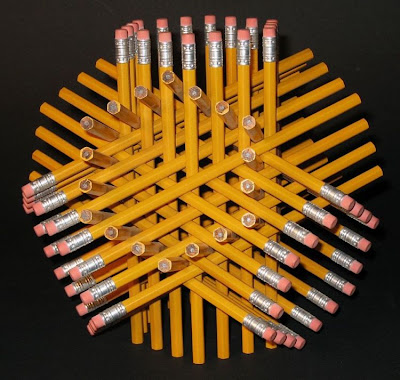 I wonder whether this is real, or simply computer-generated art.

It appears to show a 3-dimensional structure constructed of interlaced pencils (which would probably have had to be glued together rather than held together by gravity/friction).

There are four sets of 18 pencils each, with each set arranged as a hexagon, and the sets intersecting in different planes.

Real? Any engineers/design people out there? Or has someone seen it on the web with an explanation. I found this at a picture site with no explanation or credit.

Update: Anonymous found the source. This is a Conway Pencil Model:

I have applied to present a workshop on building Conway’s Pencil Models at the National Council of Teachers of Mathematics Atlanta convention in March, 2007.

John H. Conway invented a class of models built of hexagonal prisms. Participants will learn to build these models out of pencils and rubber bands, and will explore the symmetries of these models and the relationship between this model and the cubic lattice.

Thanx - and I've changed the label for this post from "oddities" to "science." And I should probably post it at Neatorama, because it is neat.

Addendum: Found the instructions for making one of these.