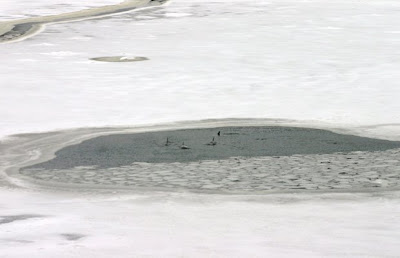 "We didn't get any response from (the Department of Fisheries and Oceans). It takes so long to get things done when you go through government departments," said Mayor Winston May. "So, some local guys decided to put out their small speedboat and put on their survival suits, and didn't they put a channel through the water to where the dolphins was at." [blogger note: the dolphins had been trapped for a week!]

"You'd hear them crying, every night," said one of the men in the boat, Rodney Rice, 39. "I went down there last night and you could hear them trying to break up more ice. . . . They wouldn't have lasted another day."

May said it took the four men about three hours to break a channel in the ice with their boat, and one — Brandon Banks, 16 — got into the water and helped calm one of the dolphins weakened by the ordeal so they could tow it to open water.

"I had a floater suit on," said Banks, "And they would come up and rest their head on me and I would keep their head out of the water so they can breathe through their blowhole."

"One of the dolphins was really weak, and one of the young guys who had a survival suit on got into the water with it and stayed with it, and the dolphin just kind of wrapped his fins around him. . . . It was amazing."

"I'm proud of him. It was good what he done," she said. "Before, everybody was saying somebody's got to get out there and help them. So they took action."