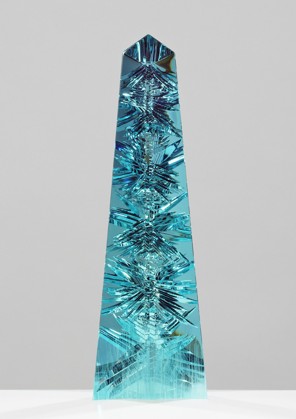 It’s the largest cut piece of aquamarine ever known — perhaps 10 times the size of the next largest. It’s 14 inches tall and weighs 10,363 carats. That’s the heft of a barbell, nearly five pounds. It’s a gift of the earth, sculpted by a master cutter into a gem of outlandish proportions...

Dom Pedro’s sculptor, the German gem artist Bernd Munsteiner, strives for “total reflection,” Post says. Most gems are faceted on the outside — like the typical brilliant or diamond cuts seen in jewelry. Munsteiner instead cuts into his gems, sculpts internal facets to bounce every beam of gathered light back at the viewer...

The bluest aquamarines rival emerald in value, but Dom Pedro may as well be priceless. It’s off the market forever, donated to the Smithsonian Institution last year... Dom Pedro will be unveiled at 11 a.m., Thurs. Dec. 6, in the National Gem Collection Gallery on the second floor of the Smithsonian’s National Museum of Natural History.

I found a photo of the uncut specimen at All About Gemstones: 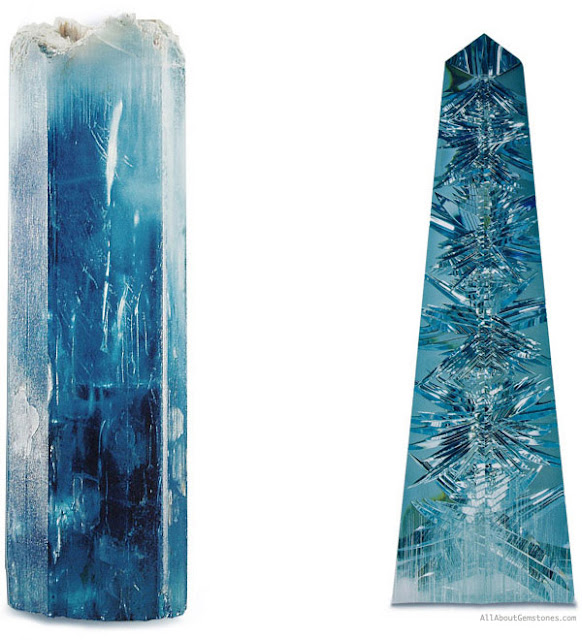 This magnificent rough stone came from the state of Minas Gerais in Brazil and was named "Dom Pedro" after the two emperors of Brazil: Dom Pedro Primeiro and Dom Pedro Segundo. Weighing 24,875 grams, this blue variety of Beryl known as "Aqua Marina" or "Aquamarine" was 10,363 carats and 23 1/4 inches (59 cm) Tall. The largest aquamarine ever located was the 'Papamel Aquamarine' at 552,500 carats, found in 1910.