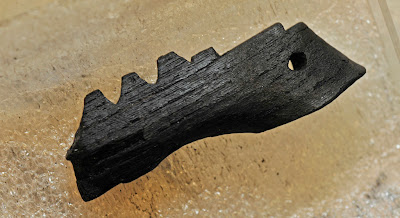 Archaeologists excavating the High Pasture Cave on the Isle of Skye have discovered a wooden fragment that they believe came from a lyre or similar stringed instrument. The fragment was burned and part of it broken off, but you can clearly see the carved string notches that identify it as a bridge. It was discovered in the rake-out deposits of the hearth outside the entrance to the cave. The deposits date to between 550 and 450 B.C., which would make the bridge a fragment of the oldest stringed instrument found in Europe...

Musical instruments from Iron Age Europe were not the luxury models of ancient Sumer nor did they have the advantage of a dry, hot environment to preserve the wood. Even Roman-era instruments are so hard to come by that we have to rely on literature, mosaics and frescoes to learn about them, or carvings on altars like the one unearthed in Musselburgh in 2010 which until now was the earliest representation of a musical instrument ever found in Scotland. Finding a piece of an instrument that is centuries older than any previous discoveries and is so clearly recognizable as a piece of an instrument (the bridge is probably the single most recognizable part of a lyre because of its shape and the string notches) is therefore enormously significant to our understanding of ancient music and poetry in Europe.

Text and image from The History Blog, where there is more information and additional relevant links.