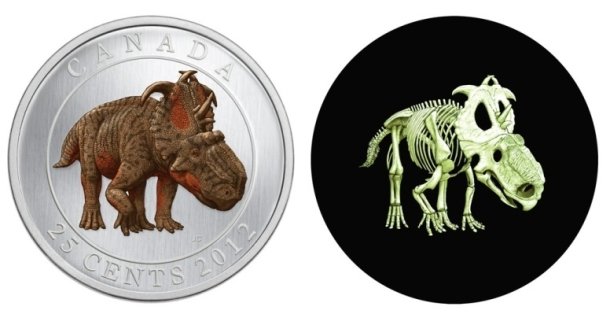 First are the glow-in-the-dark quarters:

The mint's latest collectible coin features a dinosaur whose skeleton shines at night from beneath its scaly hide.

It's actually two images on one face, which could be a world's first. The other side depicts Queen Elizabeth. Her Majesty does not glow in the dark...


The glowing novelty is a first for the mint, but sadly it won't be for general circulation. The dino's mintage is limited to 25,000, and collectors who want to count their dinosaurs at night will have to pony up to the tune of $29.95.

I saw that back in April, and then in September a reports of cryptics on Canadian coins - 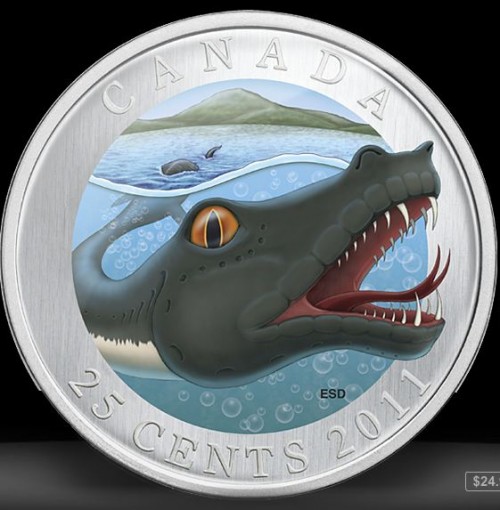 - including Memphré (a reptilian monster that inhabits a lake in Quebec), Mishepishu, (a water panther of Lake Superior) and Sasquatch.

At the risk of sounding like a grumpy old man, I'll express my dismay at this type of marketing, which should be done by Hasbro, not a national mint.  I fully understand these are not standard coinage for circulation.  But there once was a time when collectable coins actually commemorated events (state centennials, sesquicentennials, expositions, Olympiads - and they were minted from gold and silver.  This stuff is metallic junk (cupronickel) designed to raise money for government by touting "collectibility."  I could continue the rant to include the debasing and extreme proliferation of modern commemorative stamps (which are no longer collectible except to the most gullible).  Sigh...