In 2010 I bookmarked a story in Madison's Cap Times about a couple who were encountering opposition to their plans to establish a "green cemetery." 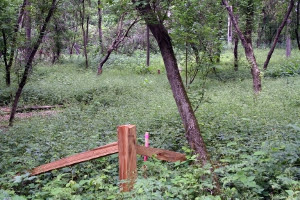 Farley is proposing to bury 70 to 100 people a year at the Natural Path Sanctuary, which comprises about 25 acres of his property just west of Verona... The Skinners are among a growing number of Americans who hope to be buried in an environmentally friendly way. But their options are limited. Nationwide, there are only about two dozen certified green cemeteries...

In the Dane County area, cemeteries require concrete vaults. Most are maintained with lawn chemicals. And many people are buried after being embalmed with toxic chemicals. Farley, a retired physician and longtime social activist, plans to bury about 2,500 bodies altogether, providing fertilizer for trees and plants in a sustainable, environmentally friendly manner. The land’s designation as a burial site would, by law, protect it as a nature preserve in perpetuity, and Farley says it would require little maintenance. “The woods in which people will be buried won’t be manicured,” he says. “There will be a trail through it where people can walk and enjoy, and there will probably be places where people can sit and meditate or sit and reflect."..

But the plan has been held up by neighbors who fear that a cemetery will take a bite out of their property values. “I have a lot invested, so I obviously have to protect my assets,” says neighbor Brian Raffel, who’s trying to sell his home, assessed at $2 million, which lies on property adjacent to Farley’s land... Raffel is not alone. Several neighbors signed a letter to the Springdale Town Board opposing the cemetery. The town’s planning commission voted it down in July, but Supervisor Wayne Hefty says the Town Board will likely give it a thumbs up at its Sept. 13 meeting...

Farley says he’s doing everything he can to accommodate the concerns of his neighbors, but they just can’t get past the “ick factor” of having a cemetery near their properties. But Tim Esser says it’s not an irrational fear that drives his opposition. He worries that the cemetery threatens to contaminate well water, despite that fact that a hydrologist hired by Farley says it won’t. And he points to the fact that the appraiser hired by Raffel, as well as the town’s assessor, have told town officials that the cemetery will hurt property values. “It reduces your pool of buyers, which reduces your value,” Esser says...

In the Madison area, cemeteries will allow for unembalmed bodies — traditional Jewish ceremonies forbid embalming — but they have to be entombed in a concrete vault, not because of any law, but because cemeteries want to keep the grounds flat. “Without them the graves will settle and you have kind of a dipping effect,” McNally says. “So it’s hard to keep them manicured the way people have come to expect them to be.”..

I hadn't seen a followup, so I was pleased a couple weeks ago to encounter a link to the website for the now-thriving Natural Path Sanctuary.


Green cemeteries are burial grounds where care of the land is a primary concern. The land is preserved in its natural state forever. Burials are limited in number using only 10-30% of the land. Natural burials occur in harmony with nature without any toxic chemicals. Upon death, the body is allowed to return to the earth entering into the natural cycle of life. There are certain rules and standards that must be practiced in order to be considered a green cemetery, with different levels of certification. Typically green cemeteries do not allow embalming fluids or cement vaults. Containers are made from unfinished and non-precious woods, and no metal is allowed. Full body burials are encouraged as this is less harmful to the environment than cremation, but both methods are acceptable. Full body burial in a biodegradable covering/shroud/blanket, has the least environmental impact and is the choice encouraged at the Natural Path Sanctuary green cemetery.

There's more information at the link, and at the website for The Center for Natural Burial.


Costs of green burial vary and can be substantially cheaper than traditional burial in urban areas, but often are more costly than rural cemeteries. At The Meadow, for example, a membership including a plot, opening and closing of a grave, a memorial planting fee and endowment care fee are $3,065, excluding the cost of a boulder marker. At White Eagle Memorial Preserve in Goldendale, a 20-by-20 plot is $2,200, and opening and closing a grave is $600. Most green caskets or containers are cheaper than traditional coffins, but they can get spendy for rare woods or special joinery.

And for those of you with pets, there is this consideration:


Last May, the Texas Banking Commission, which regulates funerals and cemeteries [does that make sense to you?], deep-sixed burials of pets in cemeteries for homo sapiens. But Texas still welcomes human burials alongside animals in pet cemeteries...

As the clip reveals, some Texans are also opting for their own burials--sans Bootsie---in pet cemeteries. The cost of room and board, notes the clip, beats its counterpart in people cemeteries by a mile. So why not think outside the box?

Found at Wig & Pen, where a relevant news video is embedded.