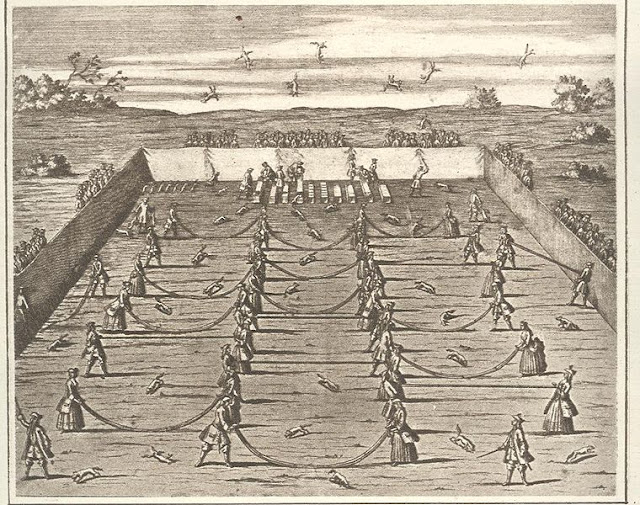 The explanation involves cruelty to animals, so I'll leave it beneath the fold.


Fox tossing would take place in an arena, usually either created by setting up a circle of canvas screens in the open or by using the courtyard of a castle or palace. Two people would stand six to seven and a half metres (20 to 25 feet) apart, holding the ends of a webbed or cord sling which was laid flat on the ground. An animal such as a fox would then be released from a cage or trap and driven through the arena, across the sling. As it crossed the sling the tossers pulled hard on the ends, throwing the animal high into the air. The highest throw would win the contest; expert tossers could achieve throws of as high as 7.5 m (24 ft). On occasion, several slings were laid in parallel, so that the animal would have to run the gauntlet of several teams of tossers.

The result was often fatal for the tossed animal. Augustus the Strong, the Elector of Saxony, held a famous tossing contest in Dresden at which 647 foxes, 533 hares, 34 badgers and 21 wildcats were tossed and killed. Augustus himself participated, reportedly demonstrating his strength by holding the end of his sling by just one finger, with two of the strongest men in his court on the other end. Other rulers also participated in the sport. The Swedish envoy Esaias Pufendorf, witnessing a fox-tossing contest held in Vienna in March 1672, noted in his diary his surprise at seeing the Holy Roman Emperor Leopold I enthusiastically joining the court dwarfs and boys in clubbing to death the injured animals; he commented that it was remarkable to see the emperor having "small boys and fools as comrades, [which] was to my eyes a little alien from the imperial gravity."

Text and image from Wikipedia.