Motorists who travel down French-style avenues feel as though they are going faster and are more likely to slow down. 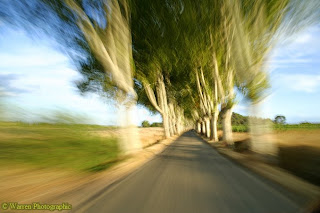 More than 200 trees were planted on the approach roads to four rural villages in north Norfolk which had a history of speeding problems...

Provisional results found that drivers reduced their speed on the roads into Martham, Horstead, Mundesley and Overstrand by an average of two miles per hour...

By strategically planting trees along the roadside the driver's perception of speed can be altered. As the car approaches the village the trees are planted closer and closer together giving the impression that the vehicle is moving faster. This encourages the motorist to slow down.

More details at the 2010 Telegraph article.   I have no doubt about the physiology and psychology of the effect, but another consideration I've noticed when driving down avenues of trees is that, depending on time of day and orientation, the trees can generate a stobe-like effect as they block the sun from the driver's eyes.