Over the years I've posted several articles about postmortem photography, but I seem to have overlooked the wonderful group Now I Lay Me Down To Sleep.  They were featured in the On Faith column of the Washington Post several years ago. 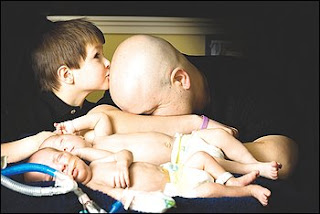 The organization has more than 7,000 volunteer photographers across the United States, including in the Washington region, and two dozen countries... The photographers stay at the periphery, quietly working without a flash as they record the fleeting moments.

The idea is macabre only for people who haven't lived through it, say Ken and Amy Salter, who became the parents of twin boys born last fall, one of whom died after months in neonatal intensive care.

My graduate school roommate's wife volunteers part of her time as a professional photographer to the NILMDTS group in the Dallas-Fort Worth area.  If you know someone with a fatally ill child, you might keep this organization in mind.