Wedding dress made from a parachute 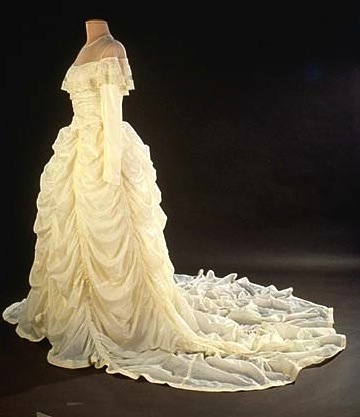 From the collections of the Smithsonian's National Museum of American History:


This wedding dress was made from a nylon parachute that saved the groom's life during World War II. Maj. Claude Hensinger, a B-29 pilot, and his crew, were returning from a bombing raid over Yowata, Japan, in August 1944 when their engine caught fire. The crew was forced to bail out...  He kept the parachute and used it as a way to propose to Ruth in 1947. He presented it to her and suggested she make a gown out of it for their wedding.

She wondered how she was going to make "this voluminuous item" into a dress. Seeing a dress in a store window that was based on one that appeared in the movie Gone with the Wind, she patterned her dress after that. She hired a local seamstress, Hilda Buck, to make the bodice and veil. She made the skirt herself; she pulled up the strings on the parachute so that the dress would be shorter in the front and have a train in the back. The couple were married in the Neffs Lutheran Church in Neffs, Pennslyvania, July 19, 1947.

Via The Museum of Ridiculously Interesting Things.   And since my newly-installed widget probably won't find it, I'll manually insert a link to Carol Burnett's famous "Went With The Wind" sketch.