A most interesting library borrower's card 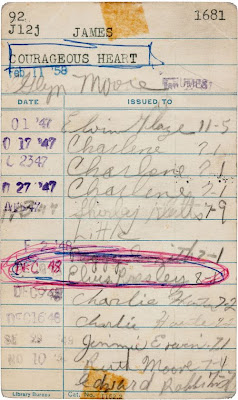 Many young readers won't even recognize what this is.  Before the era of bar code scanners, library books were checked out by writing one's name on a card kept in a pocket inside the cover.  This particular book was checked out by a boy later to become rather famous.


The book--written by Bessie Rowland James (b. 1895)-- was Courageous Heart, a Life of Andrew Jackson for Young Readers, and was published in 1934.  I guess it was appropriate reading, as the Presley family had just (September 12) moved from Tupelo into their new small apartment at 578 Poplar Avenue in Memphis, Tennessee...

Found at Ptak Science Books, where there is also a photo of Johnny Cash's school report card (with straight A's for "conduct").

The Elvis library card is presently being auctioned, with a current bid just north of $4,000.   Librarians, remember to check these cards before you toss them out when converting to new inventory systems.