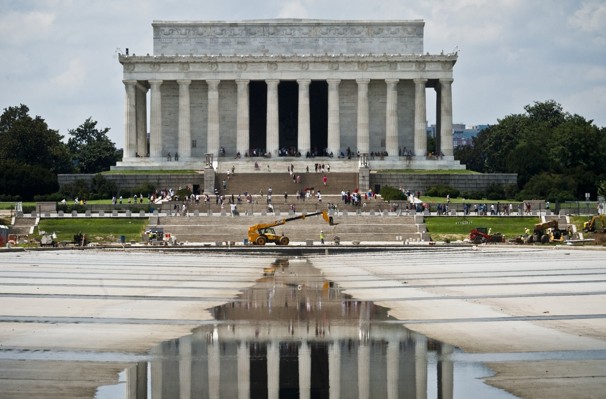 
The four-ton hammers have been at it a week now. Pounding the timber pilings through the earth... The 18-month, $30.7 million project to replace the 80-year-old reflecting pool, which began in November, is well underway. Last week workers started sinking the pilings — 2,133, to be exact — that will support the new pool.

- in part because I was born in Washington D.C. and some of my earliest memories are of the monuments and the cherry blossoms.   Now the pool is ready to be refilled.


It will debut an almost completely rebuilt and slightly redesigned pool — shallower, but more aesthetically pleasing, with a tinted bottom, sidewalks to replace the old dirt paths and subtle nighttime illumination.

It will also employ a new water supply system in which its water will for the first time be drawn from the Tidal Basin — not from city water reserves — and be cleaned and recirculated. The old pool could not circulate its often-stagnant water...

Once the site of winter ice skating and summer toy boat regattas, by 2010 the pool was a fetid wreck, its water off limits to the public. Its old bottom was cracked and leaking 500,000 gallons of city water a week, 30 million gallons a year...

This is the part of the story which got my attention:


And after the terrorist attacks of Sept 11, 2001, fears arose that the shallow, unobstructed pool might be an avenue for an attack on the Lincoln Memorial. Indeed, Quinn said, the security aspect “was probably the biggest driving force in getting this plan approved.” In 2010, the concerns, coupled with government stimulus money through the American Recovery and Reinvestment Act, made replacement of the pool possible, Quinn said... Security was enhanced by a three-foot dip in the bottom at the west end of the pool, acting as a kind of moat to protect the Lincoln Memorial.

A universally-recognized national icon, reduced to decrepitude and fetid conditions, wasting 30 million gallons of city water a year, the subject of decades of pleas for upgrading, doesn't get fixed until someone says that terrorists might drive across it to attack the Lincoln Memorial.  So then they spend the money.  What a goofy mindset.