Checking the political affiliations of your neighbors

From an article at ProPublica:

Curious how many Democrats live on your block? Just download the Obama campaign's new mobile app. The app, released last week, includes a Google map for canvassers that recognizes your current location and marks nearby Democratic households with small blue flags. 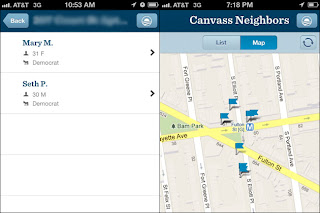 For each targeted address, the app displays the first name, age and gender of the voter or voters who live there: "Lori C., 58 F, Democrat."

All this is public information, which campaigns have long given to volunteers. But you no longer have to schedule a visit to a field office and wait for a staffer to hand you a clipboard and a printed-out list of addresses. With the Obama app, getting a glimpse of your neighbor's political affiliation can take seconds.

While The New York Times dubbed the app "the science-fiction dream of political operatives," some of the voters who appear in the app are less enthusiastic about it. "I do think it's something useful for them, but it's also creepy," said Lori Carena, 58, a long-time Brooklyn resident, when she was shown the app. "My neighbors across the street can know that I'm a Democrat. I'm not sure I like that."

It's unclear if the app displays all registered Democrats who live in a certain area, or only a subset of voters President Obama's campaign is trying to reach.

Asked about the privacy aspects of the new app, a spokesperson for the Obama campaign wrote that "anyone familiar with the political process in America knows this information about registered voters is available and easily accessible to the public."

I know the political affiliations of some of my neighbors, because I know which lawns sprouted McCain/Palin signs last election and which ones posted "Recall Walker" signs more recently.  And I can sense political leanings from cocktail and backyard conversations.  But I'm not sure I'm comfortable with databases like this one being distributed more widely.

More details and viewpoints, and a link to the app at ProPublica.