Shoes made from human skin 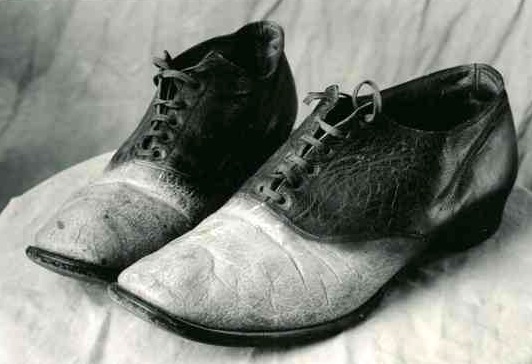 The skin of Big Nose George, to be precise.  The Oddment Emporium has the story:


In 1878, [Big Nose George] Parrott and his gang murdered two law enforcement officers in the US state of Wyoming. In 1880, after getting drunk and boasting of the killings, the men were apprehended and Big Nose George was sentenced to hang on April 2, 1881, following a trial, but he attempted to escape while being held at a Rawlins, Wyoming jail. When news of the attempted escape reached the people of Rawlins, a 200-strong lynch mob snatched George from the prison at gunpoint and strung him up from a telegraph pole.

Doctors Thomas Maghee and John Eugene Osborne took possession of Parrott’s body after his death, in order to study the outlaw’s brain for signs of criminality. During these procedures, the top of Parrott’s skull was crudely sawn off and the cap was presented to a 15-year-old girl named Lilian Heath. Heath would go on to become the first female doctor in Wyoming, and is noted to have used Parrott’s skull as an ash tray, pen holder and doorstop.

Skin from George’s thighs, chest and face was removed. The skin, including the dead man’s nipples, was sent to a tannery in Denver, where it was made into a pair of shoes and a medical bag. The shoes were kept by John Eugene Osborne, who wore them at his inaugural ball after being elected as the first Democratic Governor of the State of Wyoming. Parrott’s dismembered body was stored in a whiskey barrel filled with a salt solution for about a year, while the experiments continued, until he was buried in the yard behind Maghee’s office. Today the shoes created from the skin of Big Nose George are on permanent display at the Carbon County Museum in Rawlins, Wyoming, together with the bottom part of the outlaw’s skull and George’s earless death mask.