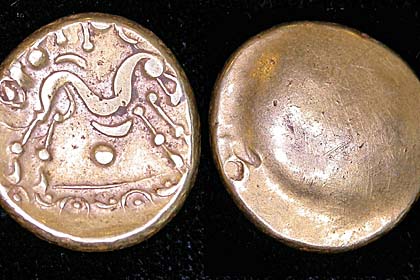 A set of ten gold coins from the Harborough Museum, in Leicestershire:


As the museum puts them on public display, curators have dated the coins to around 50 or 60 BC, made of a style symbolic of north-west France and the Low Countries, which were given the Latin name of Gallo Belgica during their Roman occupation at the time.

These origins suggests that the inhabitants of Leicestershire, known as the Corieltavi, had French connections, although the lucrative value of each piece would have made them the stuff of elite tribe members...

“You don’t normally find imported coins this far north – this is the most northerly example so far. They are usually found in the south-east of England, maybe because the area is closer to the continent, or perhaps because they had strong trade links with the Gallo-Belgic tribes.

I think the design is fascinating.  Although it must (?) be culturally unrelated, the stylistic horse on the obverse looks similar to me to the Uffington White Horse.