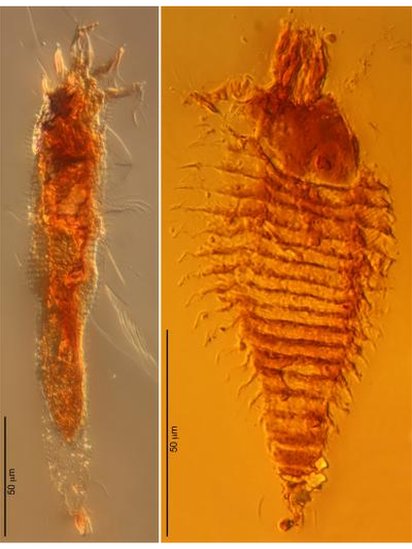 As reported in the Proceedings of the National Academy of Sciences:


Abundant 230 million-year-old amber from the Late Triassic (Carnian) of northeastern Italy has previously yielded myriad microorganisms, but we report here that it also preserves arthropods some 100 Ma older than the earliest prior records in amber... Antiquity of the gall mites in much their extant form was unexpected, particularly with the Triassic species already having many of their present-day features (such as only two pairs of legs); further, it establishes conifer feeding as an ancestral trait...

From the BBC report on the manuscript:


After a painstaking screen of more than 70,000 droplets, Prof Grimaldi and his team discovered three ancient arthropods - including two species of previously undiscovered mite - entombed within these small resinous gems.

The new mite species are the oldest fossils of an extremely specialised group called Eriophyoidea. This contains about 3,500 living species, all of which feed on plants and sometimes form abnormal growth called "galls"...

"When flowering plants entered the scene, these mites shifted their feeding habits, and today, only 3 percent of the species live on conifers. This shows how gall mites tracked plants in time and evolved with their hosts."