The changing "middle class" of the United States 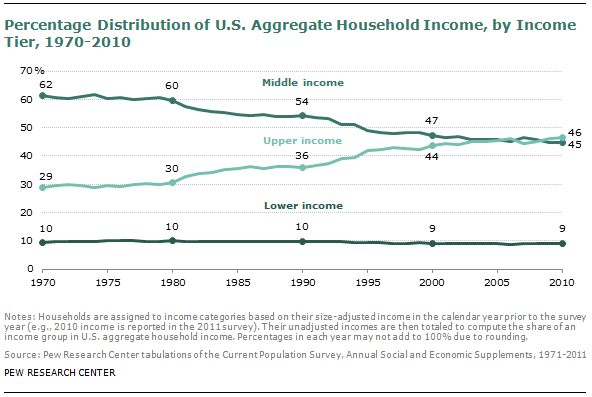 The graph above comes from a Pew Research Center study released this week. 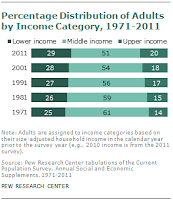 There is an interesting section of the study looking at which people self-identify as being "middle class."


In addition to looking at a “statistical middle” derived from government data, this report looks at those who self-identify as middle class, based on a Pew Research Center national survey of 2,508 adults. In the survey, 49% of adults describe themselves as middle class; 53% said the same in a similar survey in early 2008...

Similar shares of whites (51%), blacks (48%) and Hispanics (47%) say they are middle class, even though government data show that whites have a higher median income and much more wealth than blacks or Hispanics.

Adults ages 65 and older (63%) are more inclined than all other age groups to call themselves middle class... Meantime, younger adults (those ages 18 to 29) are more likely to say they are in the lower or lower-middle class; fully 39% say this now.

Much more at the link, via The Dish.