Is this structure real? - updated, with answer 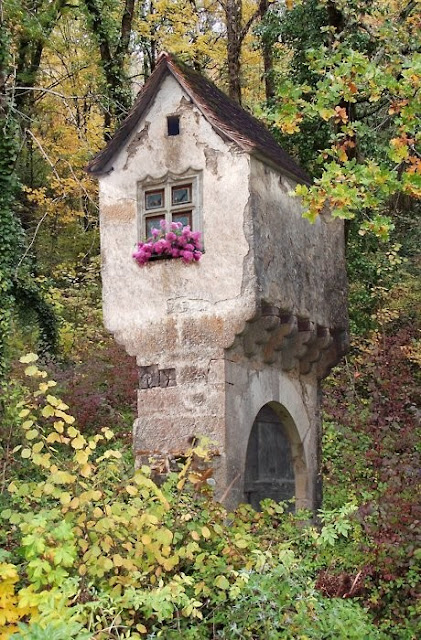 Or is it a painting?  I'd like to think the former, but the architectural style is unknown to me.  If it's real, I would guess it would have been built somewhere in the Balkans or in Eastern Europe.  Is it some sort of watchtower?  There may be a ?man-made wall behind it, so perhaps its a guard tower within an overgrown fortification.  Interesting how the top flares out like that - reminiscent of some old Norwegian and northern European designs for placing toilet holes outside walls...

Addendum:  A TinEye search found the image at MontvalentStock, so I think it's real - but no details are given there.

Found amidst a collection of Rapunzel-themed images at Anachronistic Fairytales.

Second Addendum: Proving once again that no question posted here goes unanswered, I'll tip my hat to an anonymous reader and to Ed for solving the mystery.  It's a real structure in a modified image.  The original is here - 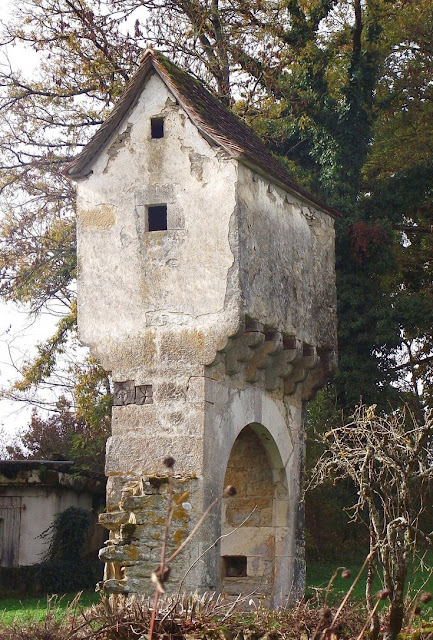 - also from the same MontvalentStock source.  In this version the image is labelled "Lavergne dovecote" and filed as "places, exterior."  The image at top had been modified re background and flowers and filed as "premade backgrounds."

I find it to be just as interesting without the background.  Ed found additional images here and here.  At Wikipedia I found the practical explanation for the protruding upper level:


Their location is chosen away from large trees that can house raptors and shielded from prevailing winds and their construction obeys a few safety rules: tight access doors and smooth walls with a protruding band of stones (or other smooth surface) to prohibit the entry of climbing predators (martens, weasels…).