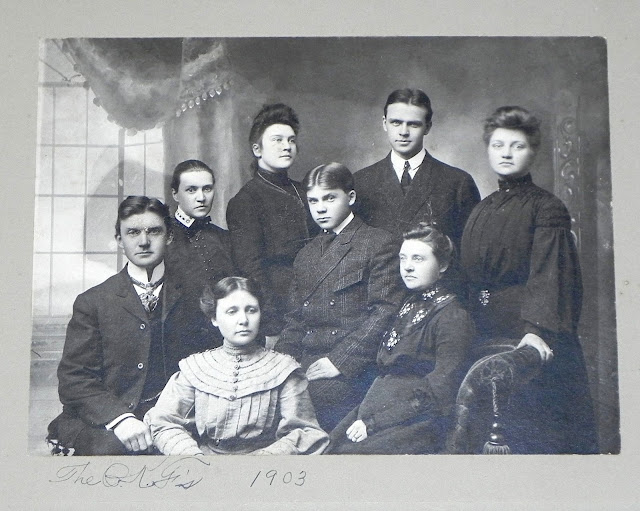 I was surprised and delighted yesterday to receive an email offering me "greetings from your fifth cousin in Norway."  A member of the Finseth (or Finset) family whom I did not know had been searching his family name on the internet, and encountered a post I wrote in 2009 about my great-granduncle Anders K. Finseth.  My new-found fifth cousin (he and I share a great-great-great-grandparent) turns out to be a professor at the University of Oslo.

In the hopes of fostering more such encounters, I'm going to post one more family photo.  This 1903 photo, taken at a studio in the farming community of Kenyon, Minnesota, portrays eight children of Ole K. Finseth.  In 1853 O.K. emigrated to the United States with his parents and siblings (including the aforesaid A.K.), originally settling in Rock Prairie, Wisconsin.

When O.K. came of age he moved to Minnesota and married Gunhild Lien; these are their children ("The O.K.F.'s) in 1903, shortly after O.K. died.  On the far left (under a stain in the photo) is 28-year-old Knut Olaus Finseth, my grandfather; the more perceptive among you may recognize his face as the one I use for my avatar in the right sidebar of this blog.

There's no need here to detail any personal histories.  As I look at the family tree that I have, I see four generations going back to 1770 on my grandfather's side, and seven generations going back to the 1600s on my grandmother's side.  The various last names acquired through marriage read like a Norwegian phone book:  Brandvold, Ulsaker, Bakke, Quie, Torseth, Distad, Dahle, Hatlestad, Boe (and of course Anderson, Christenson, Hanson, Johnson, Larson, Nelson...).

That's the way it was with immigrant families who out of convenience or necessity found marriage within their own ethnic communities.  But when you trace these same people forward toward modern times, the patterns change.  One of my aunts married a Swede - despite her parents' stern objections.  Her brother married a Catholic girl and had to keep the marriage secret to avoid being disinherited.  My mother married a man of German ancestry.  And the more recent you follow the bloodlines, the more varied the surnames become: Daigneau, Boucher, Jones, Maschka, Alvarez, Koch, Rehm, Sinjem...

It's a phenomenon that happens in all families, discoverable by anyone willing to take some time to track geneaological records.  Go back a couple hundred years and come forward and discover that you are related to thousands of people.  Go back a thousand and work forward to find that you are "related" to almost everyone.  Thus is Queen Elizabeth II descended from the Prophet Muhammed and related to Vlad the Impaler.

It's a small world; we need to find ways to share it amicably and sensibly with all our relatives.