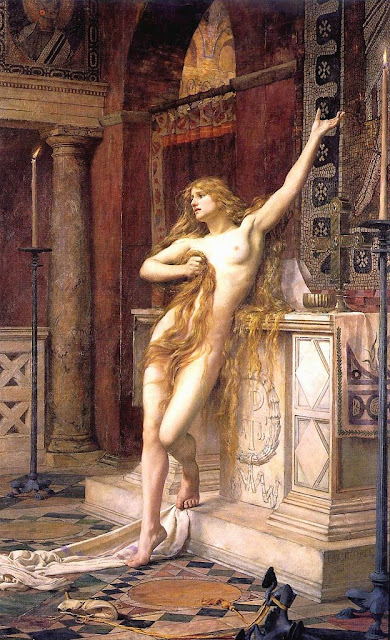 She was a real person (here portrayed in a painting by Charles William Mitchell in 1885).  She was a world-famous mathematician and teacher of astronomy, and the last librarian of the Library of Alexandria.


"There was a woman at Alexandria named Hypatia, daughter of the philosopher Theon, who made such attainments in literature and science, as to far surpass all the philosophers of her own time. Having succeeded to the school of Plato and Plotinus, she explained the principles of philosophy to her auditors, many of whom came from a distance to receive her instructions. On account of the self-possession and ease of manner which she had acquired in consequence of the cultivation of her mind, she not infrequently appeared in public in the presence of the magistrates. Neither did she feel abashed in going to an assembly of men. For all men on account of her extraordinary dignity and virtue admired her the more."

So why did the painter depict her naked?  Because she was stripped by a mob before they murdered her during violent Christian-Jewish clashes in Alexandria in 415 CE (details at Wikipedia).