A triumphal arch over the Siq at Petra 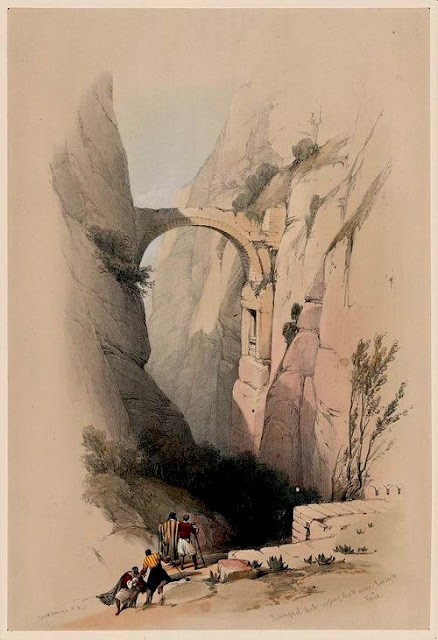 I found this image at Uncertain Times and searched for more information.  It's a lithograph from the archives of the Library of Congress, "from drawings made on the spot" by artist David Roberts, created about 1845.

Confirming that it's real and not an artist's vision, a web search produced a second engraving posted at Steven Bartrick Antique Prints and Maps: 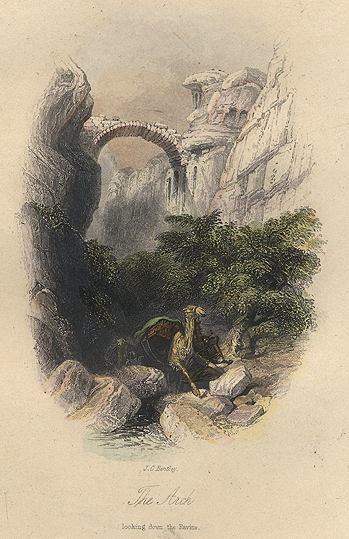 "The Arch, looking towards the Ravine" (Petra) engraved by J.C.Bentley, published in Forty Days in the Desert ..., about 1849. Small steel engraved print with recent hand colouring..."


According to Arab tradition, Petra is the spot where Moses (Musa) struck a rock with his staff and water came forth, and where Moses' brother, Aaron (Harun), is buried, at Mount Hor, known today as Jabal Haroun or Mount Aaron. The Wadi Musa or "Wadi of Moses" is the Arab name for the narrow valley at the head of which Petra is sited. A mountaintop shrine of Moses' sister Miriam was still shown to pilgrims at the time of Jerome in the 4th century, but its location has not been identified since.

- but how does this arch relate to the ancient structures there?  Brown University's website about excavations at Petra offers this:


Completely subsumed by the Romans under the Emperor Trajan in 106 CE, Petra and Nabataea then became part of the Roman province known as Arabia Petraea with its capital at Petra. In 131 CE Hadrian, the Roman emperor, visited the site and named it after himself, Hadriane Petra. The city continued to flourish during the Roman period, with a Triumphal Arch spanning the Siq, and tomb structures either carved out of the living rock or built free-standing.

I really wish I could visit Petra; it must be an awesome sight.  Some other time I need to revisit this topic to blog the remarkably-colored sandstone there.  There aren't enough hours in the day...

Addendum:  I was wondering if any reader knew the current status of the arch; if it had lasted from Roman times to the nineteenth century, it might still be there.   Alas, reader AM reports finding a report that an earthquake caused the arch to collapse in 1896, but he also found this probably-related photo by Stelmarie of "Lost Arch, Petra": 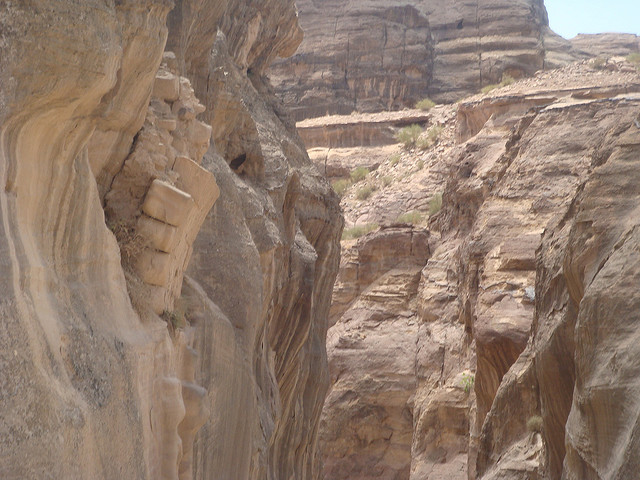 Ozymandias would have predicted this.