How to make a do-it-yourself nuclear fallout meter 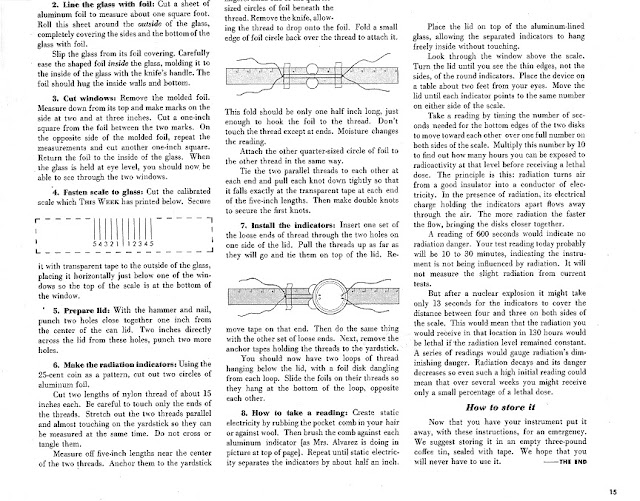 In November of 1961, the mother of one of TYWKIWDBI's readers opened her "This Week" magazine.  She encountered a two-part article discussing concerns about a cold-war nuclear attack, and dutifully clipped out this "how-to" portion so she could help her family survive.  Her son found this among her effects some fifty years later.


I think that she will smile from above knowing those years of keeping things she found important still are important.  She had several large filing cabinets (I mean large!) where the bits of info were cut, sorted, and filed away- all pertinent and valuable to her mind and career (as an educator).  Just recently, I went to Switzerland, and I took a Michelin guidebook of the country from the early 60's I found in her cabinets, complete with thoughts & notations where she had been, and what she saw, and visited some of those same spots.

Some of this blog's more science-minded readers may be able to comment on the extent to which the science in the magazine article is valid.  I find it to me more interesting from the sociological standpoint of popular culture and how families responded to the perceived risks of that era.