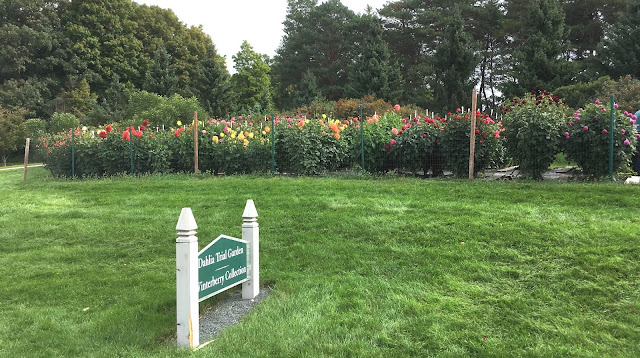 I am new to the world of dahlias.  I've been told it should be "in my blood" because my Norwegian grandfather used to dig up his dahlia tubers to store in the root cellar in the winter (probably buried in sawdust or sand) along with carrots and potatoes. 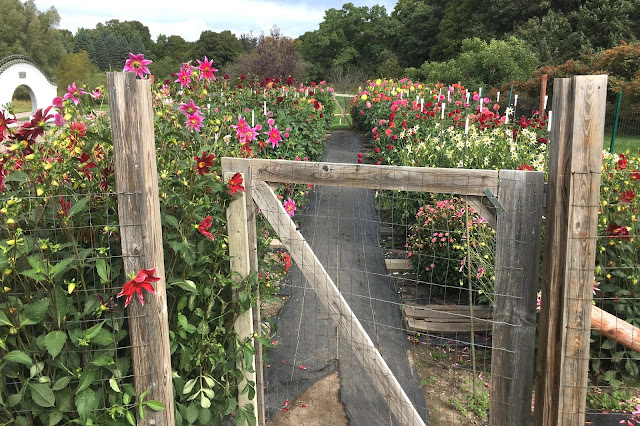 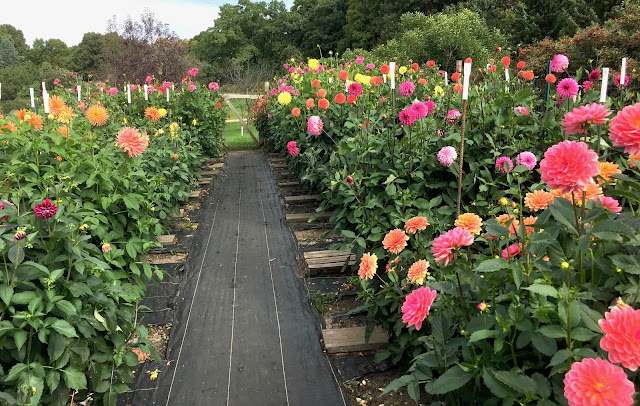 I grew up living not far from the University of Minnesota Landscape Arboretum, which has a section devoted to dahlias (photos above and below).


Each year the Dahlia Society of Minnesota plants a new selection of hybrid dahlias (Dahlia var.) which are then monitored by the Society for growth, habit, disease, flower quality and other guidelines and makes recommendations to The American Dahlia Society. Therefore you will only find numbers and letters on the labels - not names.

The blossoms are sometimes spectacular: 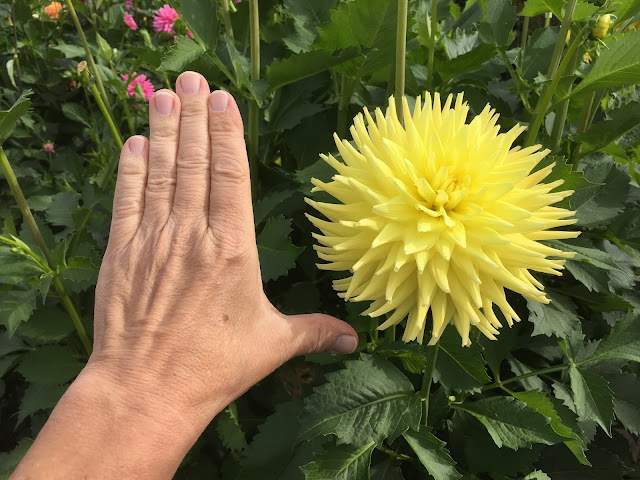 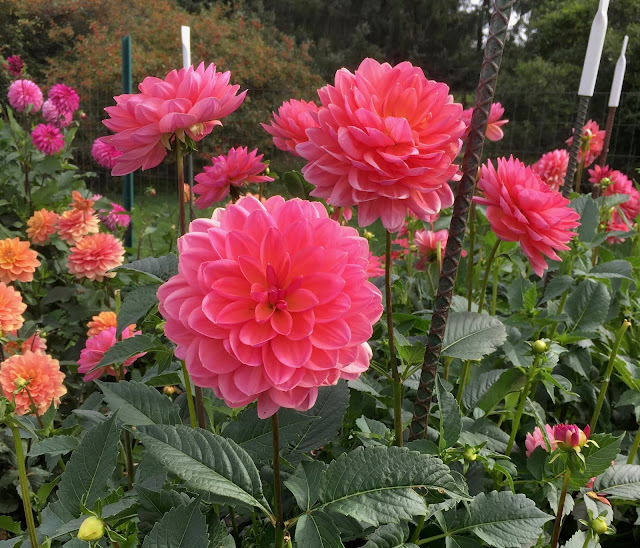 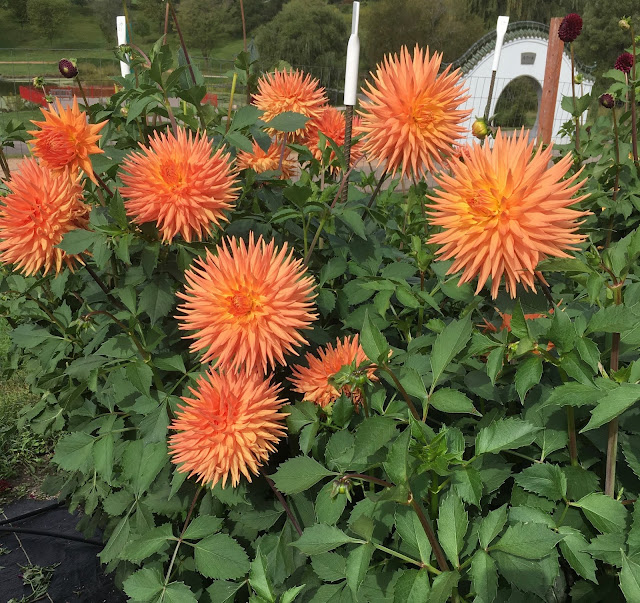 But the naturalist in me noted that the bees prefer the more basic (?more primitive) flowers - 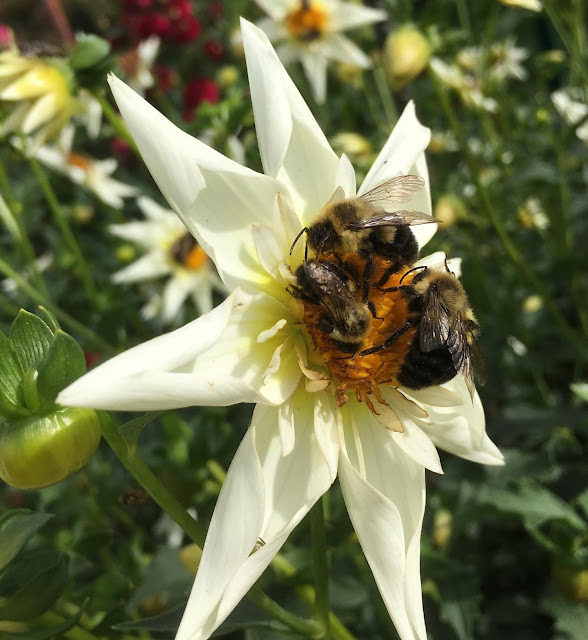 - rather than the complex ones that the hybridizers prefer.   I've noticed that with other types of garden flowers - convoluted ones probably have less accessible nectar and pollen. 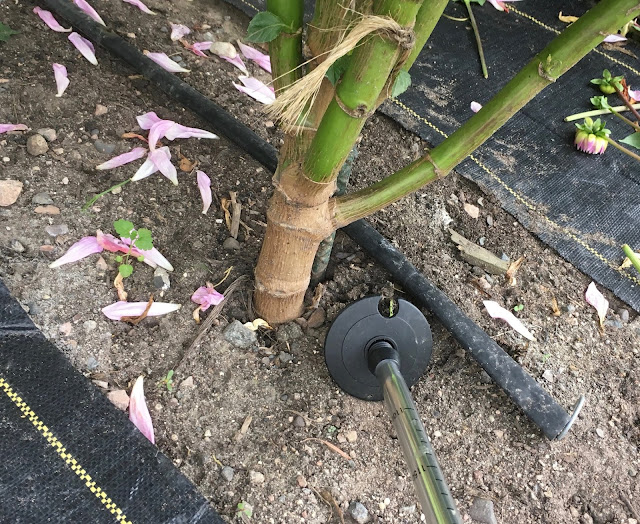 The other thing I noticed about the arboretum dahlias was the impressively robust stems (tip of my trekking pole for size comparison in the photo above).   Clearly these particular specimens are several years old and have had their tubers protected through multiple Minnesota winters.

This year I decided to add dahlias to our garden.  This past spring at our local Farm & Fleet I purchased a couple dahlia tubers.  I didn't think to take any "before" photos, but they were basically small scrawny shriveled things that were totally unimpressive.  I tilled the top couple inches of an unused portion of the garden and stuck them in.  By midsummer I had to add some vertical supports because they were already 3 feet high.  By the end of the summer they were about 5' tall, with fist-sized attractive blossoms. 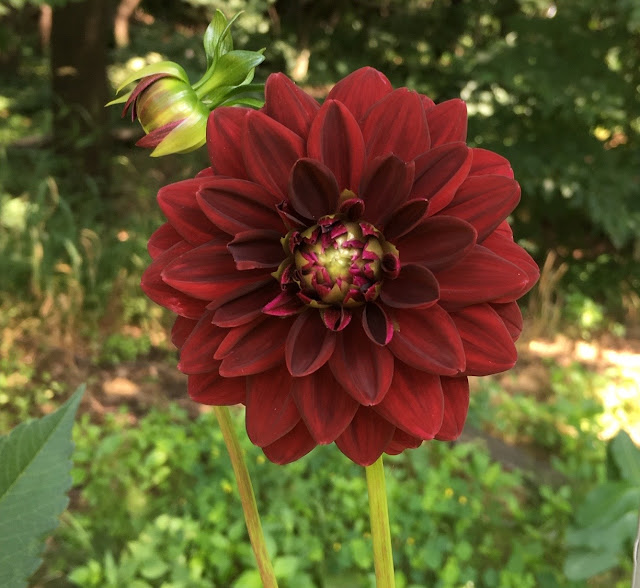 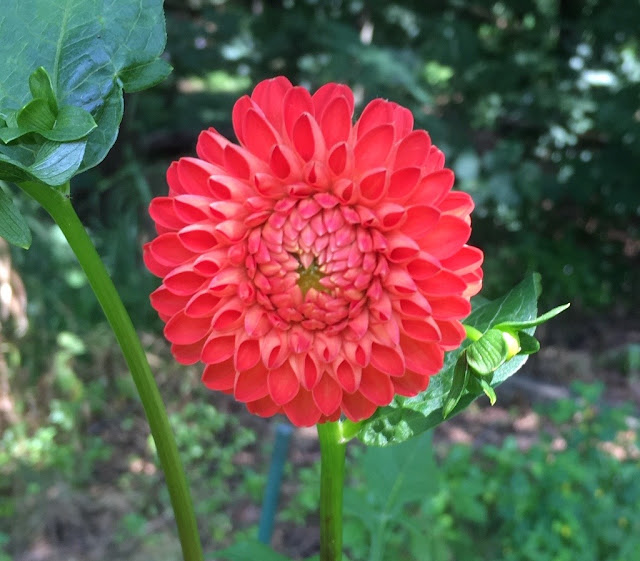 After the first frost but before the hard freezes to come, it was time this past week to dig up the tubers.  I wound up having to dig a rather deep trench to be able to get under them (and note the plant stems are still rather gracile compared to the old-timers at the arboretum) - 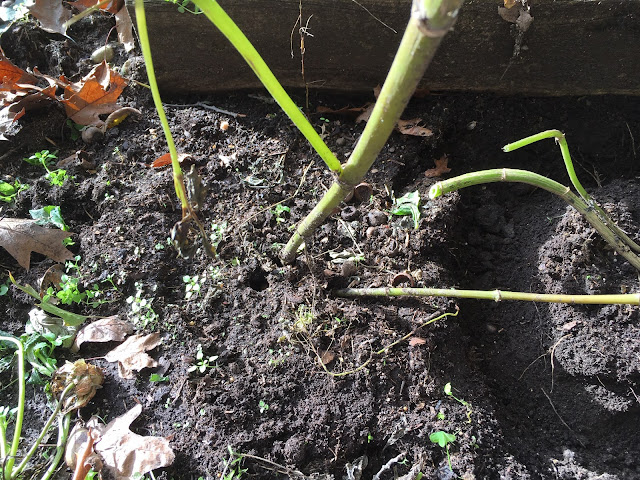 The digging entailed a bit of work, because the plants had sent roots below the topsoil into the clay underneath, and I didn't want to fragment the cluster of tubers while getting them out. 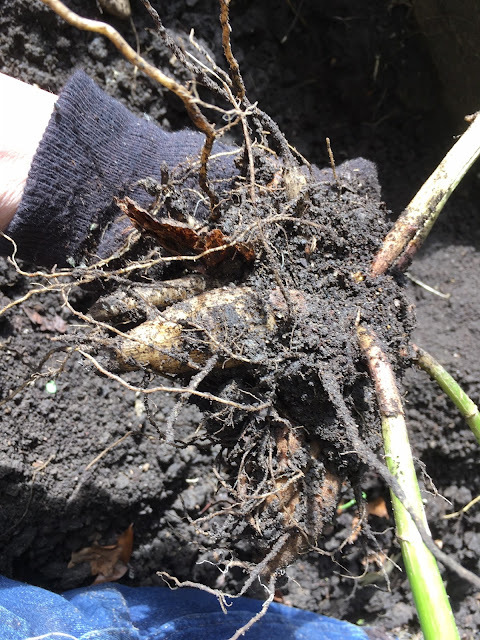 I checked out a couple library books for advice on how to overwinter the specimens.  The first step seems to be to "hang them up to dry", so I've got them sitting in an elevated wire basket on the wall of the garage - 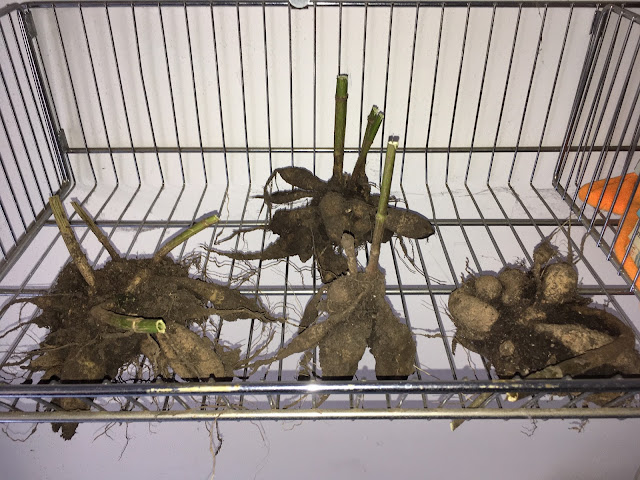 After they dry out a bit I'll clean them up by brushing the dirt off, but won't wash them because moisture increases the risk of mold.  I plan to wrap them in newspaper and keep them in the unheated garage, which in midwinter will get below the recommended 40-50 degree optimal storage temp, but should protect them from the subzero temps that will occur outside.

When spring arrives I apparently will have the choice of subdividing those clusters or replanting them as they are.  I'll probably choose the latter.

I'm posting this partly for family but also to ask readers here for any advice you may have to offer on the management of dahlias.  The books and website I've read offer some variations on how to store and how to replant the tubers; I'd love to hear comments from any readers who have actual hands-on practical experience with these plants.

Update:  After the tubers sat on that rack in the garage for a week, the soil around them dried out enough that I was able to brush it off without damaging the tubers themselves: 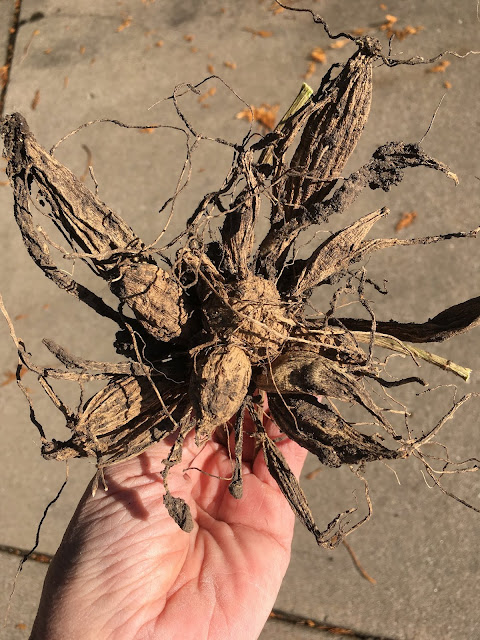 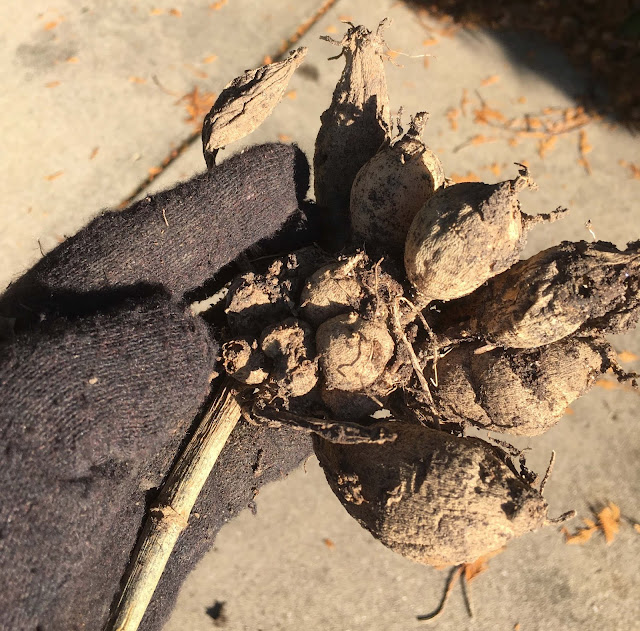 Now I need to store them in some material that will keep them not-wet, but also not dried-out by the winter air.  Lacking sawdust and sand, my choices are probably clean cat litter, potting mix, or straw.  I'm concerned the cat litter might have desiccant properties.
Update summer 2020:
Mixed success.  Some nice blooms starting to appear - 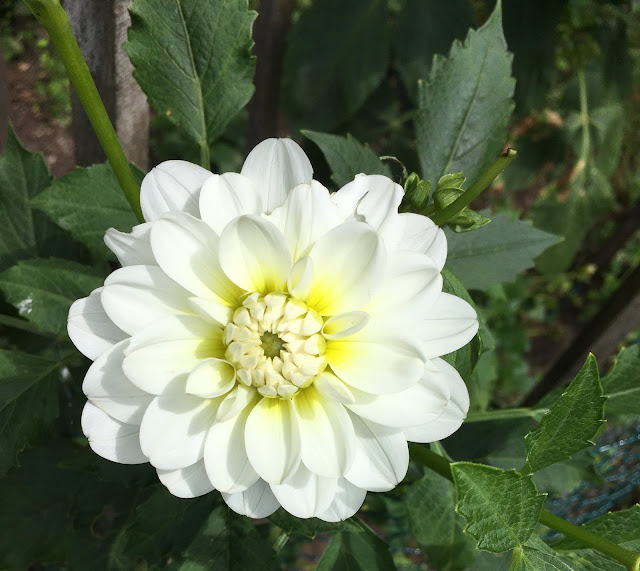 - but the local rabbits have found the plants quite tasty.  I've lost many of them, despite having fenced in the main dahlia patch (the baby rabbits went under the wire).