Cordyceps on a tarantula 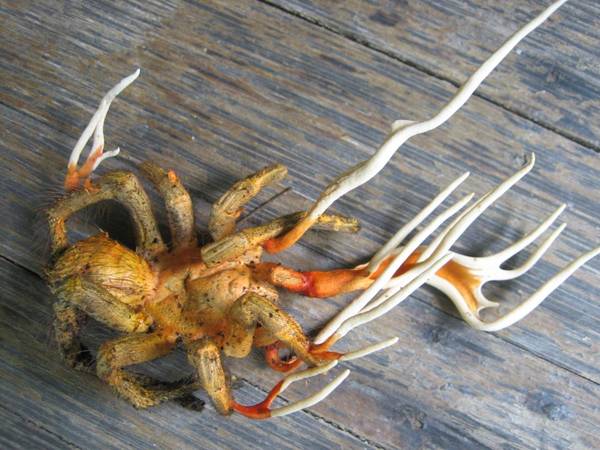 I've previously posted a David Attenborogh-narrated video of cordyceps in ant brains and emerging from a leaf-roller.  Now here it is affecting a tarantula, via BoingBoing.

Reposted from 2012 to note that the "gold rush" for cordyceps in Tibet is fading.  The Economist reported on the phenomenon last year:


Children are at the front line of the armies of Tibetans (almost every able-bodied rural resident in Yushu) who will spend a frenzied month scouring the hills for what they call yartsa gunbu. In Chinese its name is dongchong xiacao, literally “winter-insect-summer-grass”, for that is what it resembles...

This is Tibet’s annual gold rush. Yartsa gunbu is so highly valued as a medicine that it often sells for more than its  weight in the metal. It has many purported benefits, ranging from preventing cancer to curing back pain. But what makes it so prized is its supposed ability to improve sex lives. It is often described as a “Himalayan Viagra”, good for treating erectile dysfunction and (in women as well) low libido...

The children’s good eyesight and short stature make them the best spotters of the fungus among blades of grass and stalks of ground-hugging cinquefoil shrubs that soon, as the weather warms, will dot the slopes with bright yellow flowers. It is not a job for those unused to the plateau’s thin air. Caterpillar fungus, as yartsa gunbu is usually called in English, is generally found at altitudes above 4,000 metres (13,100 feet). That is higher than Lhasa, the capital of the Tibet Autonomous Region (TAR) which borders on Yushu and occupies about half of the plateau...

Digging them up requires painstaking effort. A small pick is used, with great care taken not to break the sprout from the caterpillar’s body. There is little demand for separated pieces; yartsa gunbu is dried and consumed whole. Aficionados gauge the quality of a caterpillar fungus based partly on the relative lengths of body and sprout—impossible if there is no way of being sure whether they were once attached...

[d]espite much effort, no one has yet succeeded in producing commercially viable quantities of good-quality yartsa gunbu in artificial conditions. This means colossal dividends for Tibetans. In the TAR the retail value of the more than 50 tonnes of yartsa gunbu harvested there in 2013 was around 7.5 billion yuan ($1.2 billion), equivalent to nearly half its earnings from tourism..

To boost demand for the fungus, some merchants adulterate products made of it with Viagra...

Much more information at the long read at The Economist, including discussion of the social and environmental impacts.

This year there is evidence that the mania is subsiding:


The trouble is, it’s getting harder and harder to hunt down the caterpillar fungus, which can’t grow fast enough to keep up with Chinese appetites. Tibetan nomads told Frayer that the yield from this year’s harvest was the lowest they’d ever seen... 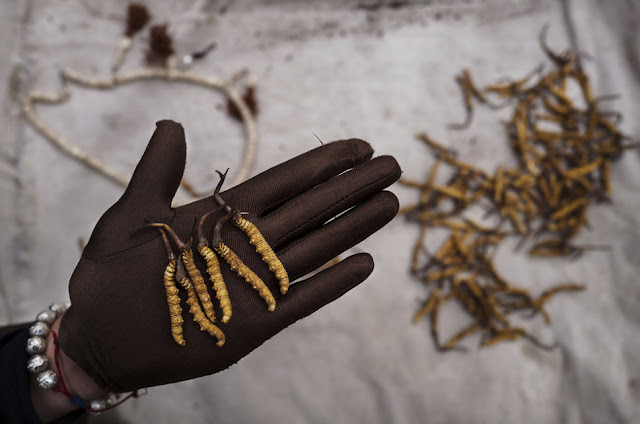 Meanwhile, prices for the fungus are falling, and harvesters fear China’s crackdown on corruption could hurt demand for the product as a high-value gift for officials. A recent health warning about arsenic levels in caterpillar fungus products is a further headache for cordyceps hunters.

“The locals know it’s a false economy, or at least temporary in many ways — one Tibetan man referred to the fungus as “fool’s gold” and he worried that one day they will be worthless,” Frayer said.

Reposted from 2016 to add this new photo of an infected tarantula corpse (via): 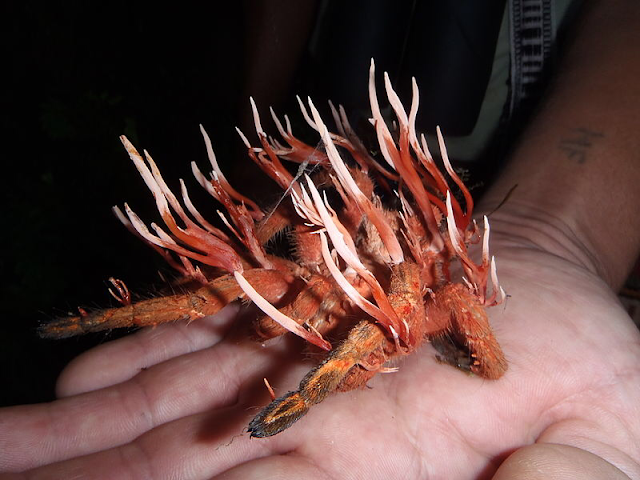