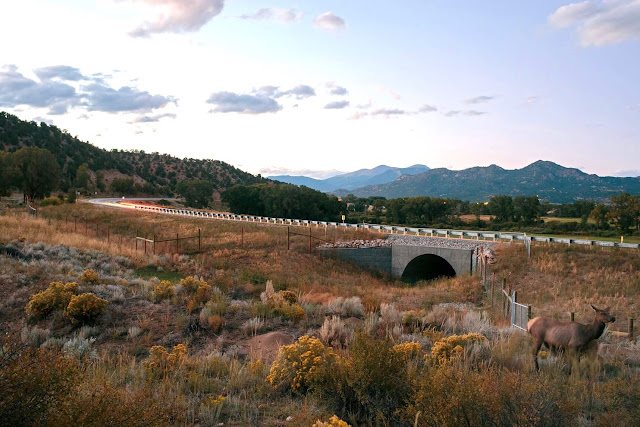 It's not just a matter of protecting wildlife - projects like these are also important for driver safety.

COLLEGIATE PEAKS SCENIC BYWAY, Colo. — U.S. Highway 285 was once a death zone for the dwindling herds of elk and mule deer on Colorado’s Western Slope. But today it offers a lifeline, helping them travel from their summer range high in the mountains to winter foraging grounds along the Arkansas River.

For the past year, a tunnel dipping under three lanes of speeding traffic has beckoned. And as frost descended recently on subalpine meadows and glittering-gold aspen, a huge bull elk, measuring at least nine feet from antlers to hoofs, entered the structure ever so cautiously. Infrared cameras on both ends captured his meandering.

The $3.5 million project is one of several planned for Colorado’s ever more crowded roads, on which some 4,000 bears, bighorn sheep, coyotes and myriad other animals died last year. The cost of the carnage exceeded $80 million, according to state officials.

Across the country, as development continues to encroach on natural areas, wildlife-vehicle collisions are taking a massive toll. More than 1.9 million animal-collision insurance claims were filed in fiscal 2019, a State Farm report found, with some researchers estimating the annual price tag of the resulting human fatalities, wildlife mortality, injuries, vehicle damage and other costs at almost $10 billion.