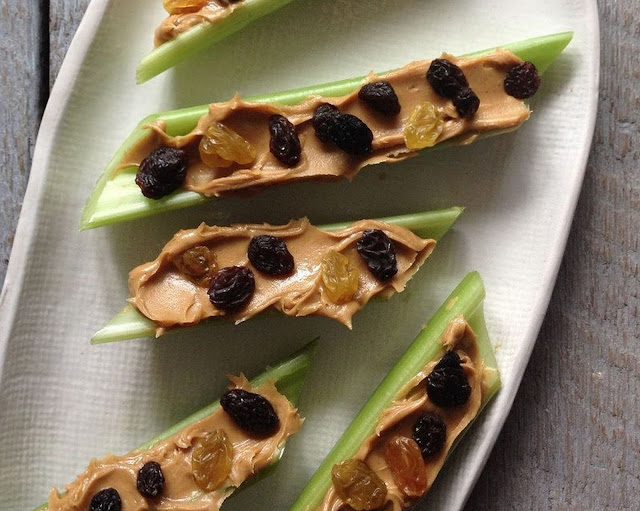 I somehow survived childhood and adulthood without ever encountering stuffed celery, until last year when a neighbor gave her children "ants on a log" at a neighborhood Thanksgiving party.


While cookbooks confirm that the American practice of stuffing celery began in the early 20th century as an appetizer for parties and adult gatherings, it didn’t become a vital part of lunchboxes and playdates until decades later. The most famous (at least for the coloring-book crowd) is, of course, ants on a log...

A hypothesis tracing the recipe origins to a product cookbook proved null. Sun-Maid (which represents about 40 percent of the raisin industry), Dole, the California Raisin Marketing Board, and even the Girl Scouts had no knowledge of the ants on a log inventor. (Sun Valley and the Raisin Bargaining Association did not respond to requests for comment.)

As it turns out, its beginnings are a bit upside down, if not backwards. A recipe for "Stuffed Celery Stalks” appeared in the Good Housekeeping Cook Book (1944) with seven iterations, the second of which instructs log builders to “lay seedless raisins end to end in celery stalks” before filling them with a mixture of cream cheese, top milk (the upper layer of milk in a container enriched by whatever cream has risen), spec pepper, and paprika. (There’s no mention of any “ants” or “logs” of any kind.)

The first print sighting took place on February 15, 1959, when the Star Tribune published a story about encouraging children to help out in the kitchen: “Anne Marie is working on snacks. Popcorn, cheese dips, and the other night, ants on a log have been some of the foods the family has shared.” The piece references the snack as a graduation from the more elementary task of frosting baked cookies...

The most basic variations play on the name: “Ants on a Slip ‘n’ Slide” (an added layer of honey), “Fire Ants on a Log (cranberries), “Ghost Ants on a Log” (mini marshmallows), and “Ants on Vacation” (no raisins). While "gourmet", "grown-up", and "fancy" updates modernize the classic for home cooks, restaurants are now reinventing the dish for fine-dining audiences.

In 2017, New York City’s Empellón added a literal interpretation to its seasonal menu, featuring (chicatanas, or flying ants. (Most famous in the state of Oaxaca, these ants are a regional delicacy.) Twain, a Chicago restaurant that closed in May, served a version of ants on a log with celery, duck liver peanut butter mousse, and bourbon cherries.

Photo credit James Ransom [cropped for size from the original].