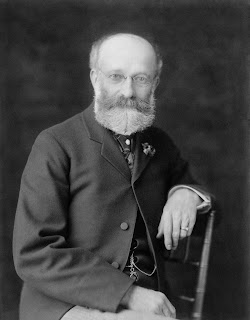 "Even during the height of the American Civil War, presidential security was lax. Throngs of people entered the White House every day. "The entrance doors and all the doors on the Pennsylvania side of the mansion were open at all hours of the day and, often, very late into the evening." Lincoln finally gave in to concerns for his safety in November 1864, and was assigned four around-the-clock
bodyguards...

On April 14, 1865, [William] Crook began his shift at 8 am. He was to have been relieved by John Frederick Parker at 4 pm, but Parker was several hours late. Lincoln had told Crook that he had been having dreams of himself being assassinated for three straight nights. Crook tried to persuade the president not to attend a performance of the play Our American Cousin at Ford's Theater that night, or at least allow him to go along as an extra bodyguard, but Lincoln said he had promised his wife they would go. As Lincoln left for the theater, he turned to Crook and said "Goodbye, Crook". Before, Lincoln had always said, "Good night, Crook". Crook later recalled: "It was the first time that he neglected to say 'Good Night' to me and it was the only time that he ever said 'Good-bye'. I thought of it at that moment and, a few hours later, when the news flashed over Washington that he had been shot, his last words were so burned into my being that they can never be forgotten." Crook blamed Parker, who had left his post at the theater without permission."