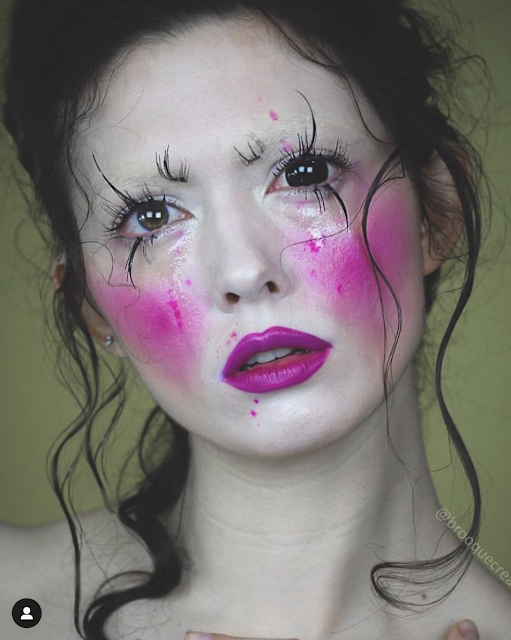 I'll defer personal commentary and just offer some excerpts from The Guardian:


... So she decided to try something totally different. One day, she created “a mess”. For an assignment, she painted her model with black, aggressive scribbles, green cartoonish snakes, blurry orange lips and spiky, Twiggy-esque lashes. “I was under the impression my look was awful,” she says. But on Instagram, it took off.

Meikle didn’t realize it at the time, but she was joining a movement that has been slowly gaining momentum – the ugly makeup revolution, a term coined by the Berlin-based makeup artist and activist Eszter Magyar, who began working on the project in 2018. “Ugly makeup revolution is a community,” she says, as is her other hashtag, makeup brutalism...

The work of these artists is frequently derided – for being both too ugly and not ugly enough. “It’s not about ugliness,” Magyar says. “It’s about irregularity. Ugly is just a word, which makes you pay attention.”..

While strangeness can be very sexy, the purpose isn’t to be sexy (which, paradoxically, is why it’s can be so sexy, I think). The purpose is to please the wearer...

It’s a compliment – a word that makes people sit up and pay attention. Ugly exists for ugly’s sake. It’s an underrated aesthetic, one that more people should embrace.