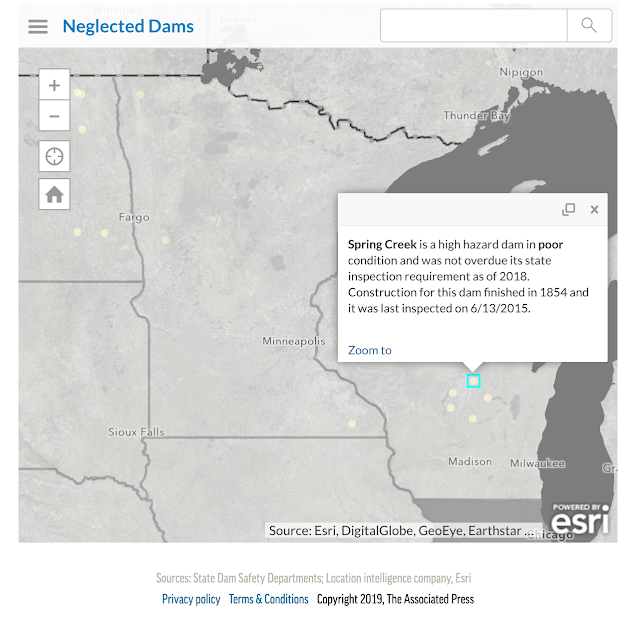 Thousands of people in the U.S. may be at risk from dams that are rated in poor or unsatisfactory condition. An AP analysis found 1,688 dams in these conditions are high hazard, meaning their failure can cause human death.

An Associated Press interactive graphic shows the location of dangerous dams in the United States.  My part of the country doesn't have many, but my old stomping grounds back in Kentucky and Indiana are just riddled with them. 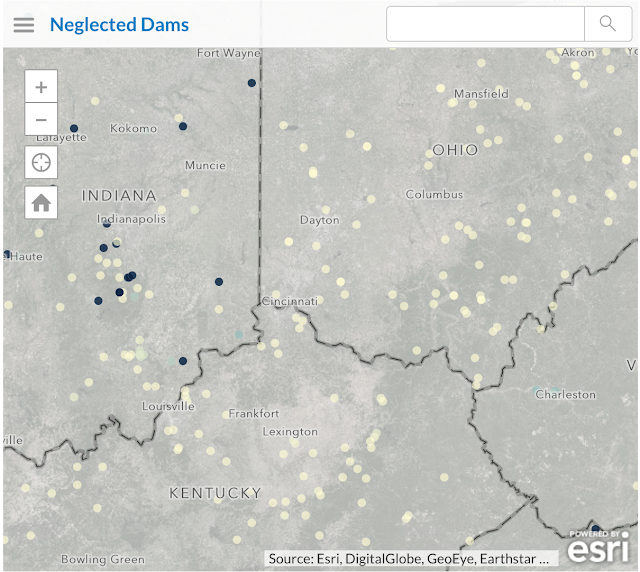 Note the graphic is interactive, so not only can you zoom to your area, but you can hover the mouse for the information shown in the top image.

I am so very, very tired of this bullshit.  American politicians have been kicking the can down the road for way too many election cycles.  Someone has to raise taxes and fix these things.  Maybe it will require electing a Socialist to get these problems corrected.

Reposted from just a month ago to add new information and a different perspective.   The source I originally cited was picked up by our local Wisconsin State Journal, which then posted an article about the dams at risk in the state of Wisconsin.

We've had significant problems, because in recent years alterations in the climate have resulted in multiple hundred-year flooding events, some of which washed out local dams, exacerbating the flooding damage: 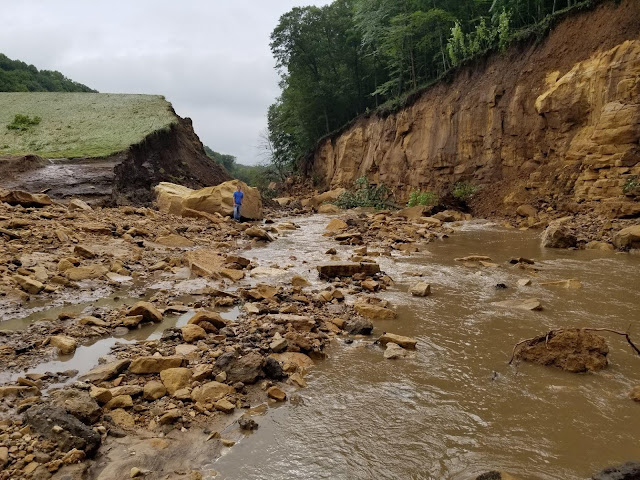 When I wrote this original post for TYWKIWDBI, I concluded with a brief rant about elected officials who are reluctant to increase taxes to pay for upgrades (or basic maintenance) to infrastructure.  What I have now learned from the Wisconsin State Journal article is that federal, state, and local governments are not solely to blame, because many of the at-risk dams in Wisconsin were privately built.


Wisconsin has only six dams considered a risk to human safety that are in poor condition, according to data compiled by The Associated Press. Even so, eight dams in the state were washed out by record-setting rainfalls last year...

The association estimates it would take more than $70 billion to repair and modernize the nation’s more than 90,000 dams. But unlike much other infrastructure, most U.S. dams are privately owned. That makes it difficult for regulators to require improvements from operators who are unable or unwilling to pay the steep costs.

“Most people have no clue about the vulnerabilities when they live downstream from these private dams,” said Craig Fugate, a former administrator at the Federal Emergency Management Agency. “When they fail, they don’t fail with warning. They just fail, and suddenly you can find yourself in a situation where you have a wall of water and debris racing toward your house with very little time, if any, to get out.”..


All eight dams [Wisconsin dams that failed] were in fair or satisfactory condition, according to the DNR.

“They all failed during extreme rain events,” said Tanya Lourigan, state dam safety engineer for the Wisconsin DNR. “They don’t have a history of being in poor condition and being neglected.”

Micheel said the historic rainfall revealed a design flaw in the dams, which are highest in the center. When spillways can’t keep up and water overtops the dam, that slope focused the rushing water toward one side of the dam, where it quickly ate into the hillside.

Investigations showed that the clay structures themselves held, but the sandstone they were attached to gave way. “They did their job for 50 years,” Micheel said. “Nobody ever envisioned them overtopping. The overtopping showed the weakness.”..


One of the goals is to install weather monitoring stations and warning systems. Another is to re-evaluate the 100-year floodplains based on current land use and rainfall patterns and how best to manage them.
“We need to change what we’re doing here,” Micheel said. “It isn’t going away.”

Mea culpa for jumping to conclusions (it's one of the few forms of exercise that bloggers get).

Reposted from five months ago to add this video of the devastation caused by the breakage of the dams in Michigan this past week:

Note these were private dams.


Unlike roads and bridges, the majority of the nation’s dams are privately owned, including about 75 percent of the dams in Michigan, according to the American Society of Civil Engineers. Many private dam owners do not finance regular rehabilitation projects, according to the ASCE. And if dams lose their federal licensing — and thus their power revenue — there often isn’t a clear mechanism to pay for needed repairs and upkeep.

The ASCE gave the nation’s 95,000 dams a D grade in its most recent infrastructure report card. Their average age is 56, and as the population grows, more dams — like the Edenville and Sanford structures that failed in Michigan — are designated “high hazard,” because of the potential for their failure to result in loss of life. The Association of State Dam Safety Officers (ASDSO) has identified 2,000 dams that are in deficient condition and carry a high hazard rating...

Many older dams have lost the purpose for which they were built: generating electricity or running mills. According to an American Rivers database, more than 1,700 such dams have been removed, including five last year in Michigan.


The company said that it has been working for years to manage the water levels in the lake the dam holds back, but it ended up in a dispute with homeowners in the area who were dismayed when water levels went too low for recreational use — and they sued to keep water levels higher. The state’s attorney general also sued, alleging that the low water levels were having a negative environmental impact.

Boyce said the moves to keep water levels higher were among the main reasons the dams failed this week....