If you want to worry about something other than coronavirus... 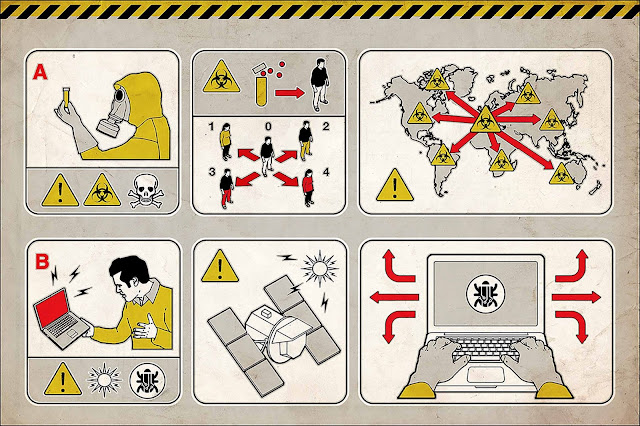 A longread at Politico lists other threats that intelligence experts are concerned about.


You might feel blindsided by the coronavirus, but warnings about a looming pandemic have been there for decades... What other catastrophes are coming that we aren’t planning for, but that could disrupt our lives, homes, jobs or our broader society in the next few years or decades?... What follows is POLITICO Magazine’s “Domestic Threat Assessment”— a list of the most significant events that might impact the United States over the next 30 to 50 years. These are threats that seem rare, but that over a given period are almost guaranteed to occur...

1) The Globalization of White Supremacy


... if you ask national security officials about the top near-term terrorism threat on their radar, they almost universally point to the rising problem of white nationalist violence and the insidious way that groups that formerly existed locally have been knitting themselves together into a global web of white supremacism... While white supremacist violence has a centuries-old history in the U.S. and overseas, the current moment particularly worries intelligence and law enforcement officials because they see violence erupting globally, empowered by social media, and lone actors referencing each other...


... cyber experts are warning that the next new threat online will almost certainly involve attempts by adversaries to manipulate or delete data or otherwise raise public doubts about whether reported reality is real reality... For example, changing Wall Street trading records to make brokers unsure of the real price of a stock or whether they’d actually purchased it at all. Or manipulating bank records so consumers wonder whether their deposits are safe...

Security experts have been warning of all manner of data manipulation attacks that could lead to ongoing or permanent questions about the accuracy of election results. While actually altering votes at scale would prove challenging, it could be comparatively easy to alter the reported vote totals...

... "deepfakes,” doctored audio or video driven by artificial intelligence that could literally put words in people’s mouths or place them in physical locations where they never were. Simpler “dumbfakes” or “cheap fakes” have proven effective... [imagine] grainy fake video or audio of Joe Biden admitting to assaulting Tara Reade; grainy video of Trump saying he plans to nuke Iran in one hour; or even Anthony Fauci saying that he’s doctoring the Covid death tolls...


[This is getting too depressing.  Go to Politico and read the details for yourselves]