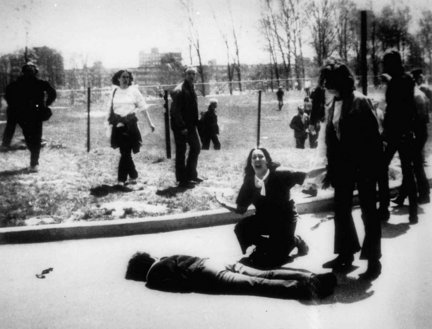 A 40-year-old audio recording of the moments just before Ohio National Guardsmen opened fire on antiwar protesters at Kent State University will finally be professionally analyzed to try to determine if -- as some claim -- an order to shoot is audible.

The recording was made on May 4, 1970, by Terry Strubbe, a KSU communications student who set the microphone of his reel-to-reel tape recorder on his dorm room windowsill, turned on the machine, and went outside to watch the unfolding protest.

The chilling 30-minute tape is the only known audio that captured sounds before the shootings, the 13-second fusillade and its chaotic aftermath. Four students were killed and nine wounded in the incident, which spawned numerous inquiries and crystallized American sentiment about the unpopular Vietnam War.

The question of why 28 Guardsmen pivoted, raised their rifles, pistols and shotguns and fired 67 times at the students is the central mystery from that bloody Monday long ago.

Update:  The analysis reveals that an order was given to fire:


"Guard!" says a male voice on the recording, which two forensic audio experts enhanced and evaluated at the request of The Plain Dealer. Several seconds pass. Then, "All right, prepare to fire!"

"Get down!" someone shouts urgently, presumably in the crowd. Finally, "Guard! . . . " followed two seconds later by a long, booming volley of gunshots. The entire spoken sequence lasts 17 seconds...

The order indicates that the gunshots were not spontaneous, or in response to sniper fire, as some have suggested over the years...

"This is a real game-changer," Gordon said Saturday of the new analysis. "If the results can be verified, it means the Guardsmen perjured themselves extensively at the trials."

Nor can it reveal why the order was given. Guardsmen reported being pelted by rocks as they headed up Blanket Hill and some said they feared for their safety, but the closest person in the crowd was 60 feet away and there is nothing on the tape to indicate what prompted the soldiers to reverse course, and for the ready-to-shoot command to go out.