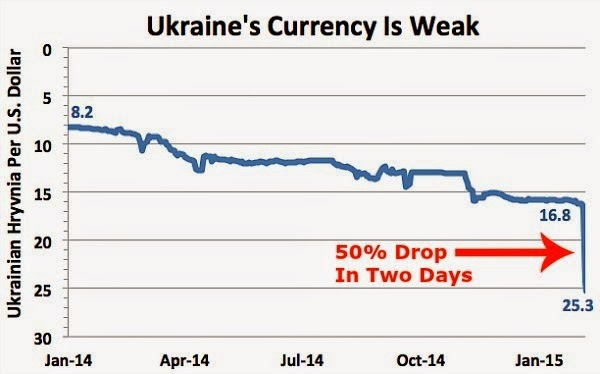 
Ukraine, to use a technical term, is broke. That's what you call a country whose currency has lost half its value in just two days.

The problem is simple: Ukraine has no money and barely any economy... The hyrvnia fell from 16.8 to 24.4 per dollar, and then again to 25.3 on Friday, on this news that the government wouldn't intervene it in anymore. In all, it was a 50 percent decline in 48 hours...

Why is Ukraine so doomed? Well, it's been mismanaged on a world-historical scale by oligarchs who, for decades, have skimmed billions off the country's nonexistent growth. That last part's not hyperbole. It seems almost impossible, but Ukraine's economy has actually shrunk since communism ended in 1991. Or since 1992. Or even 1993. And now its not-so-cold war with Russia is destroying the little that's left. It's not just that the rebel strongholds in the factory-heavy east have deprived Ukraine of a quarter of its industrial capacity. It's that it can't afford to fight against what's still it's biggest trading partner—Russia. Think about that. You don't usually trade a lot with the country you're going to battle against, but Ukraine's economy is so dependent on Russia's that it still trades more with it than any other. That means anything that hurts Russia, like lower oil prices or sanctions, just redounds onto Ukraine, and puts it in an even bigger financial hole.

TYWKIWDBI gets about 150 visits/month from readers in Ukraine.  I would love to hear your thoughts in the comment thread for this post.