I was never invited to "chicken pox parties" - updated 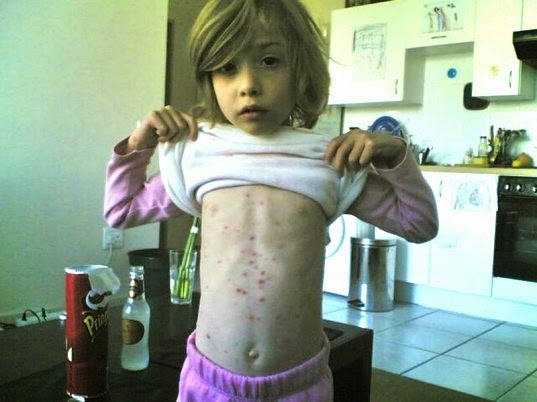 "Chicken pox" (varicella) was in the news last month [November 2011] when offers for infected lollipops were posted on the internet:


Wendy Werkit, of Nashville, offered to send other parents a "fresh batch of pox" on lollipops or cotton-buds in return for $50 (£31) via PayPal...


Her advertisement was placed on a Facebook page intended to help parents find a "pox party" in their local area, where children can mix and pick up the virus, which can be more dangerous if suffered later.

Advice for the best way to send chickenpox emerged in a thread of postings on the site. "Tuck it inside a ziplock baggie then put it in the envelope," it said. "Don't put anything identifying it as pox."

The photo above comes from a detailed article at Inhabitots, which discusses the pros and cons of naturally vs. vaccine-acquired immunity.

Not getting vaccinated against chicken pox can result in some serious health issues. For example, anyone who has gotten chicken pox naturally in their life (not been vaccinated) can later get shingles. While the chicken pox vaccine doesn’t guarantee immunity from shingles, it increases the odds you won’t get and if you do, it makes the disease less severe...

It's not a new topic; "Inside New York Chicken Pox Parties" was published in 2009.


More kids stopped by throughout the afternoon to play and rub elbows with the sick celebrants. The younger kids passed the time chasing each other, playing make-believe games about forest animals and gnomes and watching Snow White, while the older kids kept busy reading books, playing video games and practicing the guitar. " The 12-year-old son was joking about how, normally, his mother tells him to cover his mouth," Penelope says. "Now all of a sudden, his mom's trying to spread his germs. He was enjoying pointing out the hypocrisy of it all." On her way out several hours later, she had an idea. "I have a friend who couldn't find a pox party, so a mother in California overnighted her son's pajamas to her. Her kid slept in them and got chicken pox," Penelope says. "So I asked, 'Do you mind if I borrow some [dirty clothes]?' The mom gave me a pair of just-worn pajamas. My daughter slept in them that night and then I mailed them back." Alas, Dr. Gershon says this plan isn't likely to work: "Chicken pox does not spread by clothing. It requires being in direct contact with a person with active chicken pox or shingles." And, indeed, after all the trouble, Penelope's daughter remains pox-free, though she plans to try again.

Those of you with children may want to read more at one of the links.

Addendum:  Reposted from 2011 to incorporate this report of "measles parties."

She was approached recently by a friend who knew her kids were unvaccinated. The friend offered to help set up a play date with another child who was sick.

“She said, ‘I know someone who has the measles, would you like to be connected with them?’” Schiffman said.

Measles parties and chicken pox parties are practices that developed in eras before vaccines for those diseases were available... “People did this with chicken pox all the time,” said Art Reingold, an epidemiology professor at UC Berkeley who worked at the Centers for Disease Control in the 1980s. “Parents would have kids lick a lollipop and give it to other kids, or mail it to other kids.”

The chicken pox vaccine was licensed for use in 1995; for measles in 1963. Today, some parents are still deliberately getting their kids sick because they don’t believe in vaccines.

“The basic notion is ‘this is my opportunity for my kid to get immune the old fashioned way, the way God intended,’” Reingold said. “’The way nature intended.’”