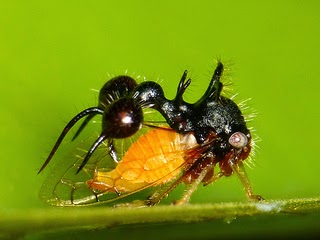 That's not an ant attacking an insect, as explained in an article entitled "Myrmecomorphomania" at Current Biology:


The insect was quickly identified to be a treehopper of the family Membracidae by the name of Cyphonia clavata — a species that lives in Middle and South America, and looks more like a creature from Greek mythology than a product of natural selection. At first, you see what looks like an ant; only on the second look, it becomes evident that the supposed ‘ant’ is actually not an ant at all, but an illusion created by a curious protrusion extending from the insect's pronotum. The main body of the treehopper is almost buried under the large ant-like shape and because of its pale colouration, much less obvious than the dark-coloured ‘ant’. The protrusion's general likeness to an ant is remarkably accurate, and, with the ‘propodeal spines’ found on the ant imitation, the similarity to the aggressive and stinging ants of the subfamily Myrmicinae is striking. Notably, the ant-mimicking structure seems to be inverted, with the imitated head facing towards the back of the treehopper. That way, as the treehopper moves forward, it probably creates a rather good impression of a reversing and agitated ant in erect defensive posture, deterring any would-be predators. To complete the illusion, the terminal segments of the treehopper's hindlegs, coloured like the ‘ant’, most likely serve as the ‘ant's’ forelegs, which provides the static protrusion with the illusion of movement.

More pix at the links.  Embedded photo by Andreas Kay, via The Ark in Space.