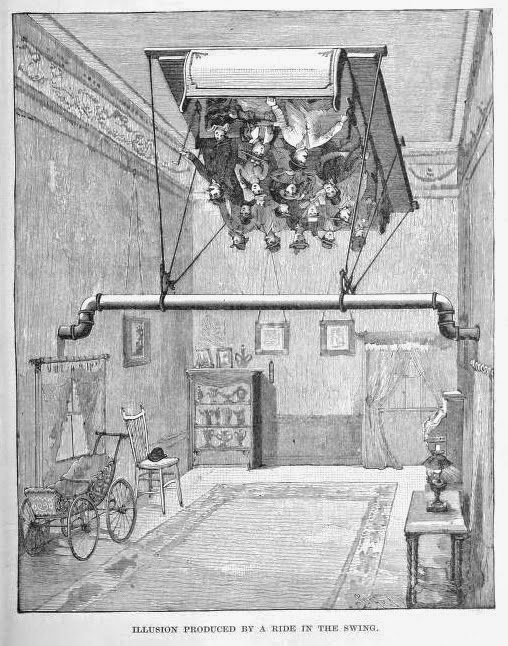 An illustration from an 1897 book "Stage Illusions and Scientific Diversions, including Trick Photography."  (with a hat tip to reader S. Norma for that online fulltext link)

Found at Vintage Blog, where no further explanation is offered.   I'll bet the participants sit in the group swing, which swings back and forth, and then the "room" surrounding them is rotated the opposite way, to give the illusion of near-inversion.

Clever.  I wonder if any modern amusement parks incorporate this idea into their rides.

Addendum:   In the Comments section, several readers have noted that this type of illusion still exists in amusement parks - for example the Villa Volta in the Netherlands and a Dutch Wonder House in Pennsylvania.

This type of ride is often referred to as a Madhouse ("designed to be an optical and physical illusion, consisting of several rows of seats attached to a swaying gondola within a rotating drum. The ride creates the impression that the rider is turning upside down, whereas it is actually the room that is moving around them.  The ride is a modern implementation of a haunted swing illusion.")

I may have given the impression while writing the post that I am totally unfamiliar with amusement parks.  Au contraire, mon frere.  I grew up in a Excelsior, a suburb of Minneapolis, home to the Excelsior Amusement Park.  Built in the 1920s on the shores of then-pristine Lake Minnetonka, it was an attraction for Minneapolis city-dwellers who arrived at the park via a (long) streetcar ride.  The featured attraction was this roller-coaster (cropped for size from the original at Minnesota Reflections):

Photographed in the 1920s, when it had a field of grain on the shoreward side.   I last visited the park in the 1960s when the field of grain had replaced by suburban homes and businesses.  The roller-coaster was constructed from wood, which had survived 40 years, but pieces of it were scattered on the ground underneath, and as I recall I opted out of testing its integrity.

The coaster was demolished in the 1970s (memoriam here) and the lakeside amusement park replaced by the inevitable condominiums.  I've not been to an amusement park since then; I don't suppose they've changed much...